To celebrate Jurassic World Evolution‘s arrival on Xbox Game Pass today, Frontier has put together a list of cool Easter Eggs that feature in the game, from nods to Jurassic Park’s creator, secret songs, and goat references, there’s plenty of information for franchise geeks. We love this list, and you will too.

For a reference to IT extraordinaire Dennis Nedry’s iconic “Uh uh uh, you didn’t say the magic word” computer lock screen, go into any level and enter the management tabs. These are located on the top left on the build menu. Then, try and access the fossil screen BEFORE building a Science Centre. You’ll see a familiar message pop up – and no, it doesn’t help if you say ‘please’.

You don’t need a Masters degree in financial studies to know that everything is getting more expensive. Inflation is faithfully represented in Jurassic World Evolution’s Return to Jurassic Park expansion. To be more in line with the ‘90s economy, all cash values are around 60% of what they are today. Running a major dinosaur theme park, however, still costs an arm and a leg. 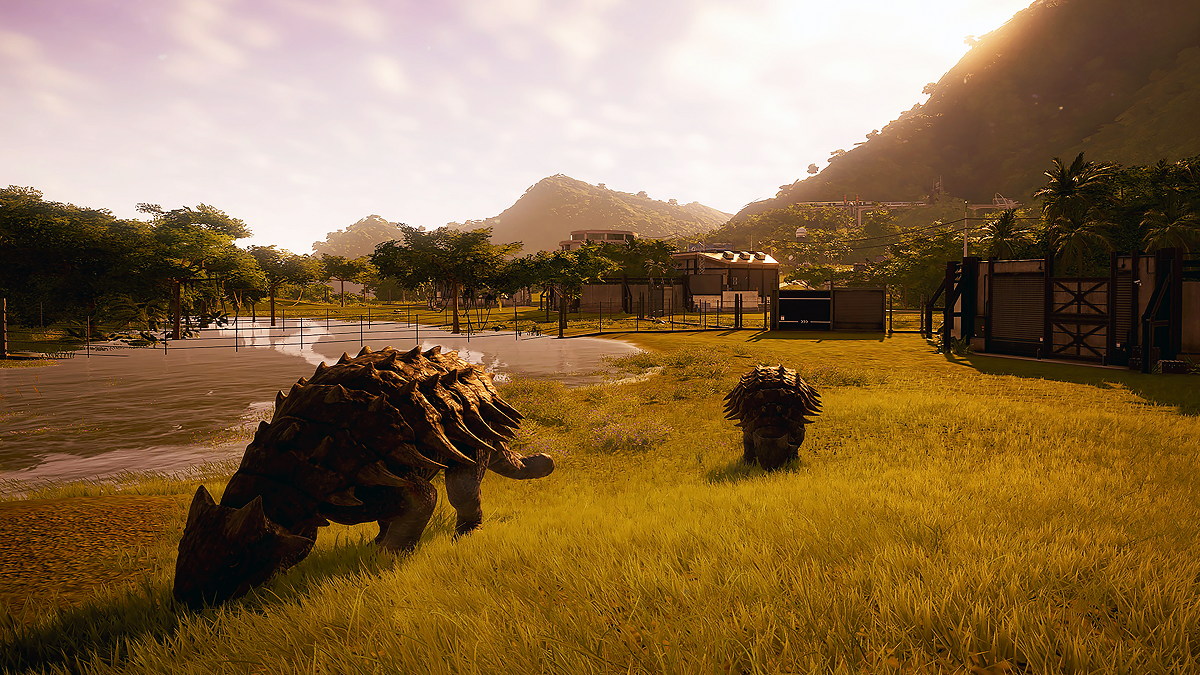 At any time in Jurassic World Evolution, you can take command of a 4×4 and drive around your park, even opening the gates of any exhibit and going off-road to get an up-close look at all your magnificent attractions. While driving, listen closely to the radio and you may hear a song called Las Gaviotas. This is the same song playing in the background when Nedry meets Dodgson under shady circumstances in Jurassic Park.

Jurassic World Evolution’s helicopter pilots are consummate professionals. When you bring up the expedition map and perform a digsite, the helicopter doesn’t just leave the expedition centre in a random direction. Instead, the bearing it heads off in actually matches its real-world destination. Thankfully, its flight time has been shortened. 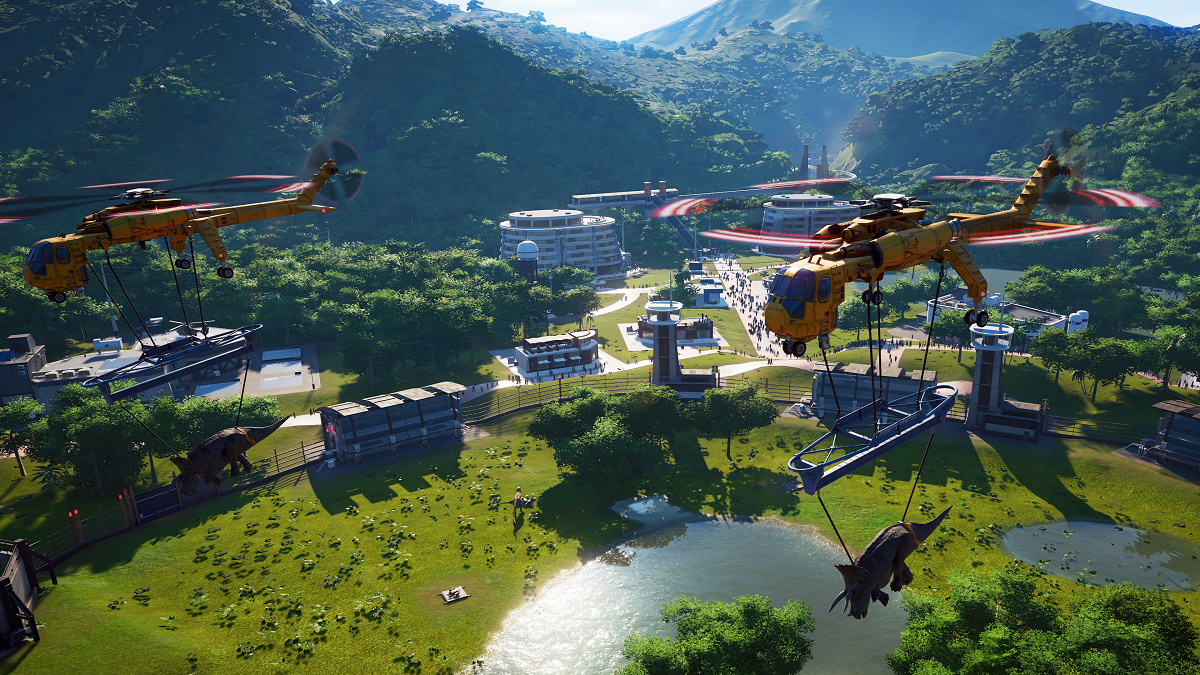 Ever wondered why it’s called the Crichtonsaurus? Meaning ‘Crichton’s lizard’, it’s named after Michael Crichton, award-winning author behind Jurassic Park (1990) and The Lost World (1995). When palaeontologists in China uncovered a herbivorous ankylosaurid in 1999, they paid tribute to the late wordsmith by naming it after him. You can resurrect and rehouse the Crichtonsaurus in Jurassic World Evolution.

When you finish a contract to complete 60% of a Dilophosaurus genome, crisis management head Cabot Finch chimes in with a nod to the tumultuous events at Jurassic Park. “It appears one of our genome cabinets was left open, and nearby, some type of gaffed can of Barbasol shaving cream was found. Empty. The can looks like it was modified to hold something. Anyway, we’ve got a team investigating…”

Live goats provide sizable meals for carnivorous dinosaurs in your park. As Alan Grant once said, species like the T. rex “Don’t want to be fed, he wants to hunt.” But what happens when the dinosaur isn’t hungry? Goats, naturally kind-hearted as they are, may occasionally add themselves to the social groups of some dinosaurs. Just as dogs are a man’s best friend, goats can be a dinosaur’s best friend – well, until feeding time comes, anyway. 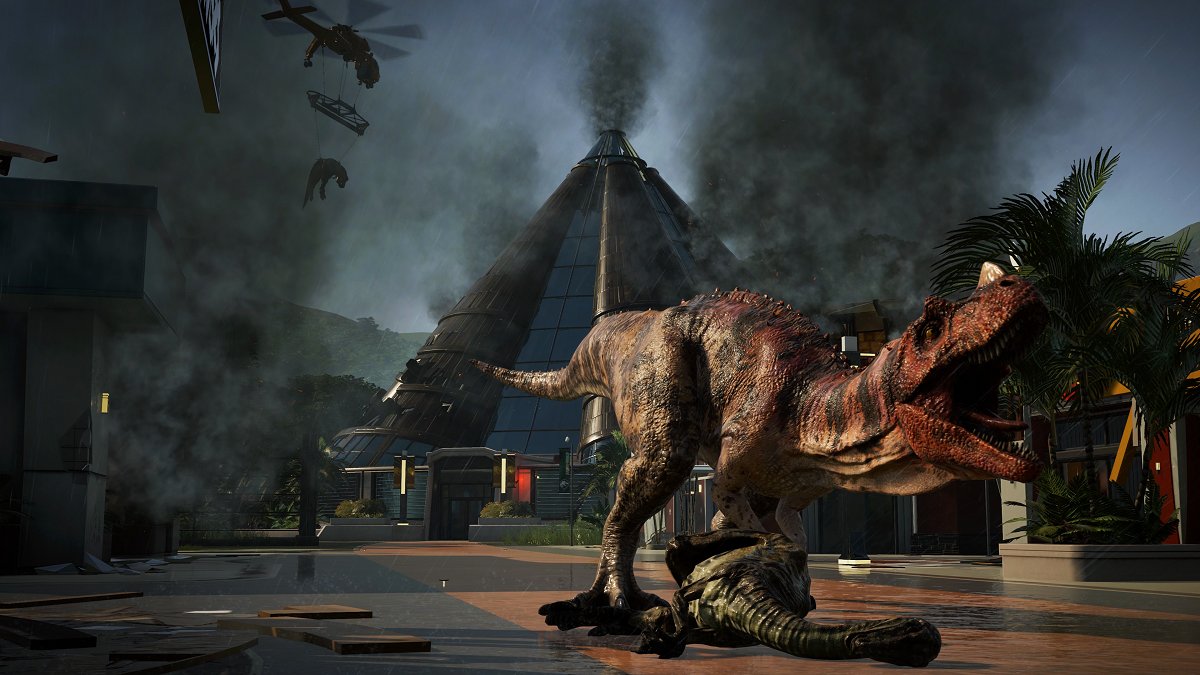 The secret goat on the map screen

Jurassic World Evolution takes place on Las Cinco Muertes, or ‘The Five Deaths’, an archipelago known for its stunning beauty, deadly dinosaurs, and of course, goats.

As you move the cursor on the expedition map over to the west of Mexico and bring these islands into view, pay attention to the UI update for a reference to the farmyard favourite.

To bring new dinosaurs into your park, you first have to find them. And to do that, you send intrepid teams of palaeontologists to far-flung corners of the globe, tasked with carefully digging up fossils and shipping them back for talented bioengineers to rebuild their genomes. During the dig, your teams can also uncover actual pirate treasure, which fetches $500,000 when sold. That’ll definitely help fund your operations.

Pteranodons rule the roost in Jurassic World Evolution: Return to Jurassic Park. Among the most famous flying reptiles to ever exist, they’re also proper escape artists. If they somehow manage to fly the nest, so to speak, you may see them soaring across other levels and modes you play in. You might want to double check your electric fences, just to be sure…