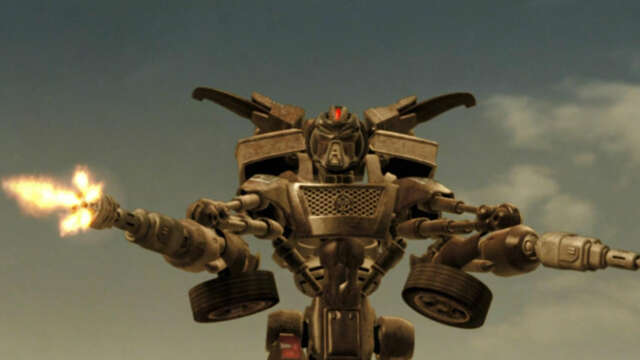 In the days of video rental stores, sometimes, the movie you wanted to watch wasn’t in, and you had to settle for something you thought would be similar based on the cover art. Or you ended up grabbing a movie you thought was the one you wanted to see, but it ended up being a cheap imitation. This is the world of Mockbusters.

These are movies that may or may not have a similar plot to the film they’re aping, but the cover art and title sure do feel familiar. A great example of this during the ’80s was Mac and Me, a mockbuster of E.T. However, Mac and Me gained its own notoriety thanks to Paul Rudd’s appearances on Conan O’Brien.

They are movies trying to capitalize on the success of another movie, with the hopes of you accidentally renting or buying it. And while there are hundreds of these movies, we found a few we couldn’t stop scratching our heads at or laughing at the titles or trailers. Below, you’ll find 13 mockbuster movies that are a clear ripoff of something else. 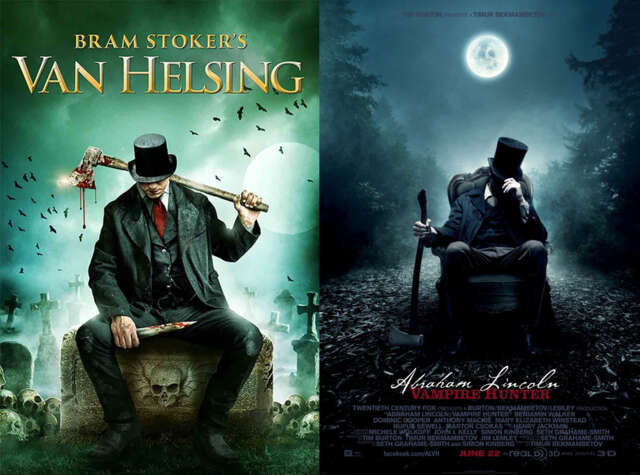 The basis of this movie is the characters created by novelist Bram Stoker. However, it’s hard not to deny that the movie poster is trying to trick you into watching it because it’s so similar to 2012’s Abraham Lincoln: Vampire Hunter. Along with the name recognition of 2004’s Van Helsing–which starred Hugh Jackman in the titular role–Bram Stoker’s Van Helsing is a movie you’ll see in your feed and you’ll ask yourself, “Have I seen this? Was it good? I don’t remember. I guess I’ll rewatch to find out.” 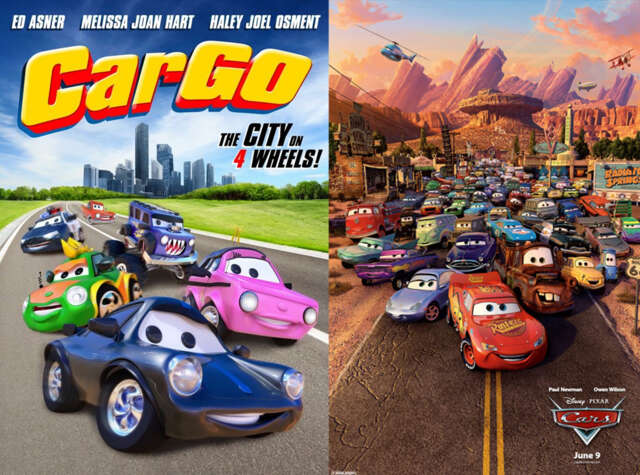 Kids sure do love Pixar’s Cars series, which features anthropomorphic automobiles learning about friendship and family, and there’s a lot of racing too. CarGo is about a young car learning about the importance of family. Strangely enough, it has a notable cast featuring Melissa Joan Hart, Haley Joel Osment, Jason Mewes, Ed Asner, and Phil LaMarr. But let’s not forget that this is straight up a Cars ripoff, with a terrible title. CarGo? CarGo where? CarGo straight to streaming, am I right? 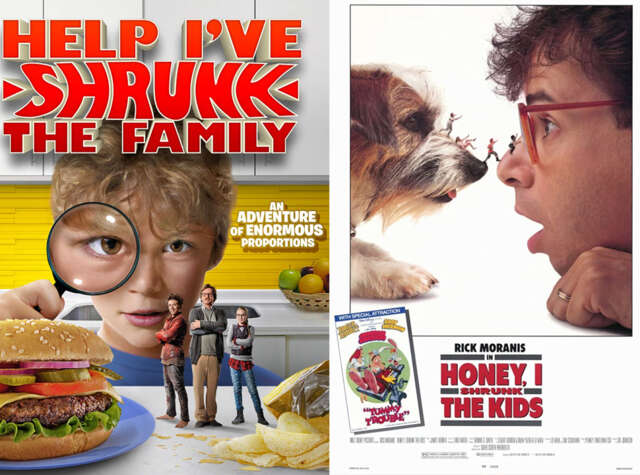 Ripping off: Honey, I Shrunk The Kids

Based on the book Wiplala by Annie M.G. Schmidts, this story follows a tiny magical being that lives inside a cupboard that shrinks an entire family down. When the movie was released in 2014, it was titled Wiplala. However, in 2017, Viva Pictures released the movie as Help! I’ve Shrunk the Family. There was a real Mandela Effect moment when looking up the classic Disney poster, as I was positive it featured Rick Moranis holding a magnifying glass. I was super-wrong on that one, even though it’s one of the most-screenshotted moments in the movie. 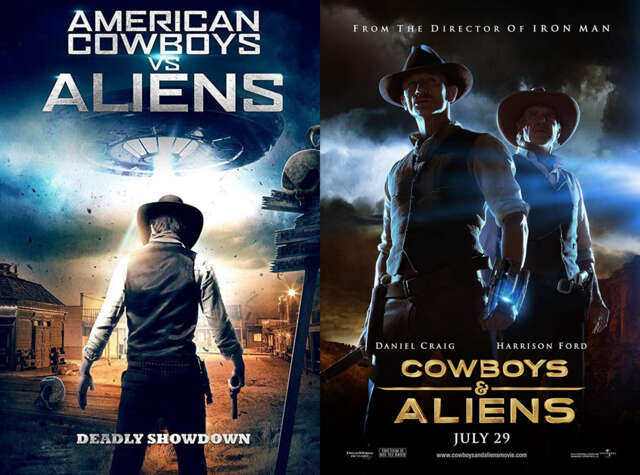 While we appreciate the specifics of this title–as we all were wondering if the titular cowboys in question were American or Mexican–the other title of this movie is Alien Showdown: The Day The Old West Stood Still, which is also a ridiculous movie title knockoff. The film follows a cowboy involved in a stand off against an alien scout during the 1850s. This video clip from IMDB shows why you probably wouldn’t be interested in it. 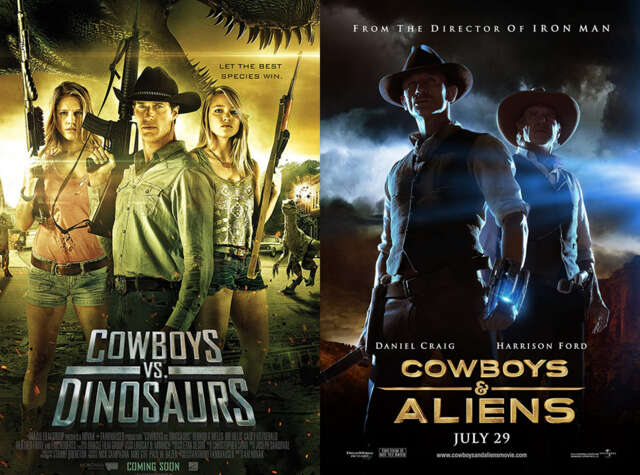 Four years after the release of Cowboys & Aliens, Cowboys vs. Dinosaurs arrived. This straight-to-TV movie doesn’t take place during the 19th century though. It’s set in the modern day when an explosion in a local mine releases a bunch of dinosaurs into a small town. How did these dinosaurs survive, especially when some are herbivores and there’s no sunlight underground? Who knows? But if you’re a person who enjoyed Cowboys & Aliens and want to see more people, who wrangle cattle for a living, fight other impossible forces, maybe you’ll accidentally watch this. 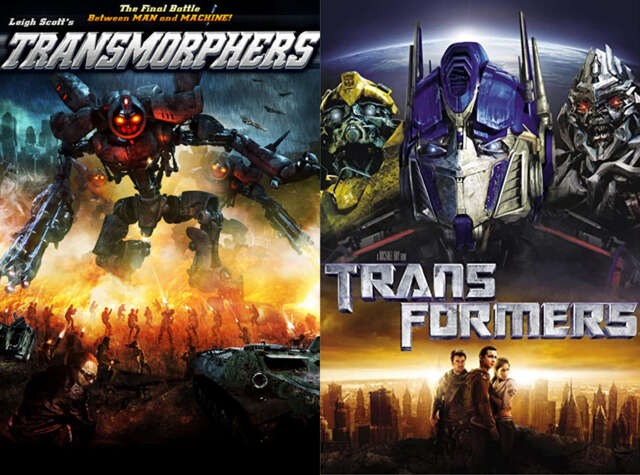 Transmorphers are more than meets the “I.” See what I did there? Coming out the same year as Michael Bay’s bombastic Transformers movie was Transmorphers, a movie with a very similar title. The film takes place 400 years after alien robots conquered Earth, and a group of surviving humans have a plan to defeat them. Sure, the plot of the movie feels more like an unofficial Terminator sequel, but this oddly-titled movie actually spawned a franchise. That’s right, there’s a whole bunch of Transmorphers movies out there, and somehow, the mockbusters movie posters are better than the ones from the Michael Bay films. 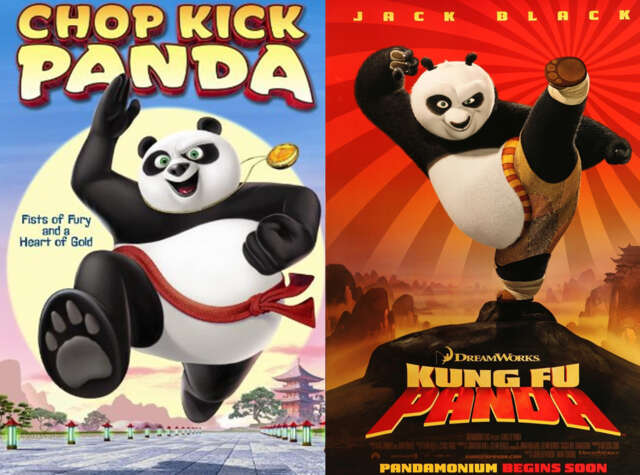 Three years after the release of Kung Fu Panda, Chop Kick Panda came out. The title alone is confusing. Can you chop something with a kick? I vote no. The film is about a lazy panda who wants to be a master of martial arts–one who we’re assuming wants to chop kick things. The poster and title of this movie will really have parents accidentally picking this up for their kids, only to realize Jack Black’s dynamic charisma is nowhere to be found. 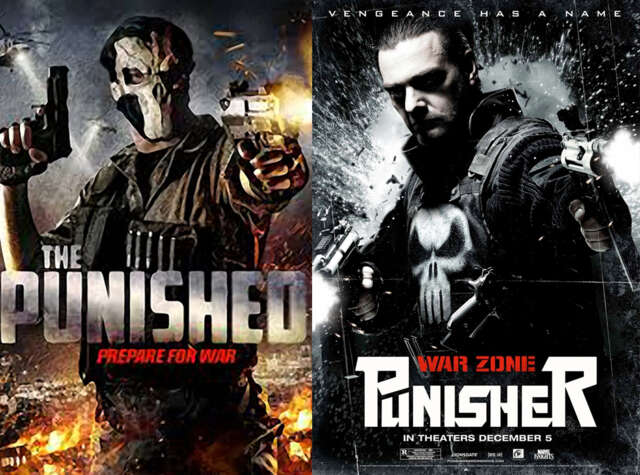 Ripping off: The Punisher

The film is about a mercenary who is hired by someone wealthy, and befriends an orphan, and has to decide whether to take the money and kill a bunch of people or fight for the injustices in the world. There’s a lot of “Punisher” elements in the plot, but the movie poster is straight-up a Punisher rip-off. Sure, Frank Castle doesn’t wear that real-weird skull mask, but the logo, along with the affinity for guns would lead lots of people to believe this is actually The Punisher. 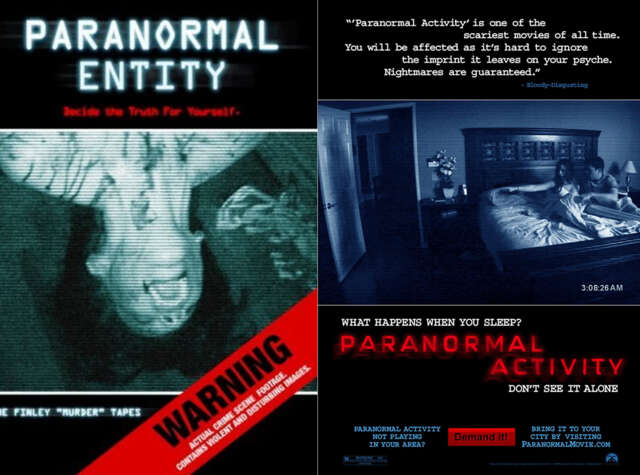 Two years after the release of Paranormal Activity, Paranormal Entity was released. What sets this found footage horror movie apart is that it’s real. Everything that happens in this movie is real–at least that’s what the synopsis wants you to believe. It was apparently released “against the wishes of the authorities” because the world wasn’t ready to learn that a woman was murdered by spooky ghosts. 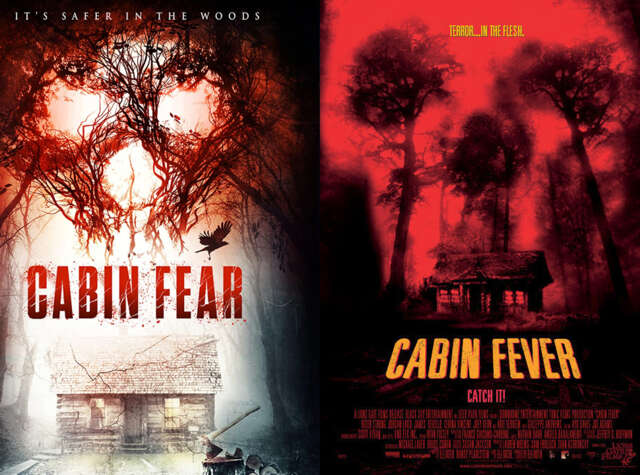 When your movie poster is using tree branches to make it look like there’s a skull, it’s obviously trying to trick people into thinking they’re picking up Cabin Fever–a movie about a virus killing people. 2015’s Cabin Fear follows a group of people who go to a secluded location in the woods for a destination wedding–a thing that constantly happens. However, there’s a killer on the loose, picking them off one-by-one–a synopsis that can describe 90% of slasher horror movies. The trailer for the film is hilarious, featuring bland acting and forgettable moments. However, did you know the whole movie is available to watch on YouTube? 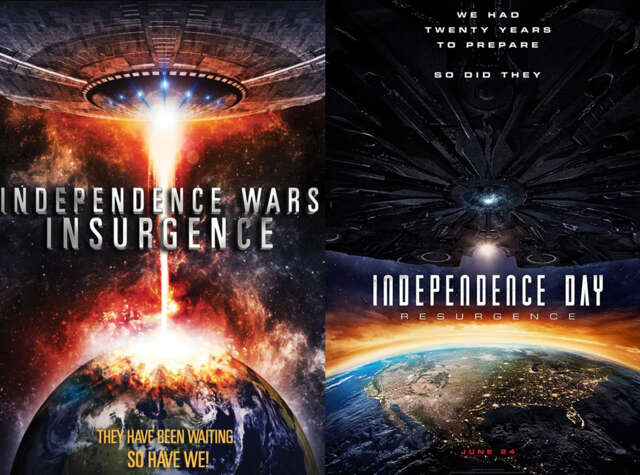 Originally titled Interstellar Wars, the movie had a bit of a name change to sound a lot like Independence Day: Resurgence. The mockbuster in question follows an alien species that attaches Earth after coming through a portal on the dark side of the moon. Additionally, it also offers up a zombie-like virus, as this movie tries to throw everything popular in cinema in order to make a compelling film–which Independence Wars is not. 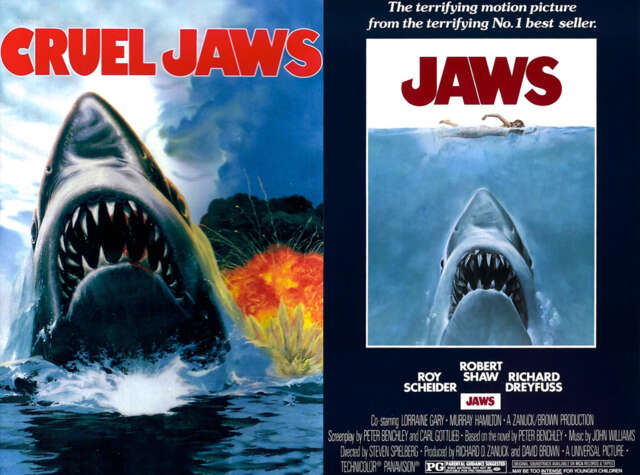 Do you love Jaws? Well Cruel Jews–which was marketed as Jaws 5: Cruel Jaws–has almost nothing to do with that movie. It is about a shark attacking people, and yes, it reuses footage from Jaws, Jaws 2, The Last Shark, Jaws 3-D, and Deep Blood. However, it’s not part of that sweet Jaws canon. Many sources who have written about the movie, including Jabootu’s Bad Movie Discussion, report Cruel Jaws actually stole the footage for the movie, which is crazy to think about. 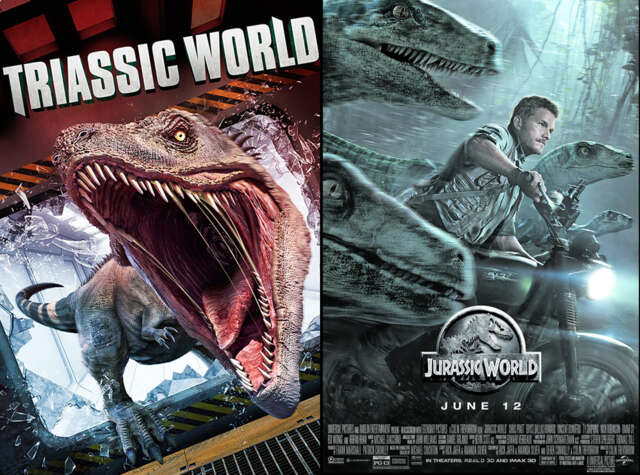 Obviously, the title Triassic World will have you thinking about Jurassic World. But the plot for this mockbuster is hilarious. Scientists are using dinosaurs to grow human organs. Of course, the dinos escape and kill people. The film seemingly all takes place in an underground bunker as well. Hasn’t Hollywood learned you can’t keep dinosaurs in cages?