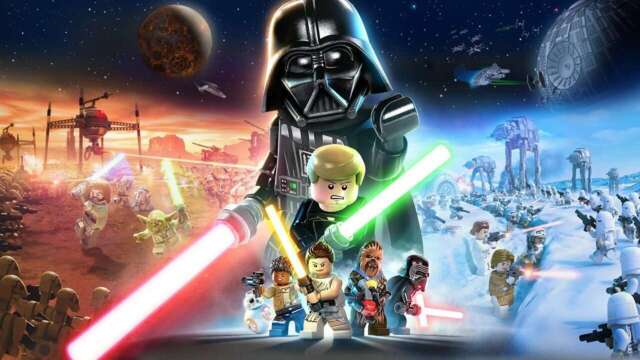 Star Wars is composed of dozens of different stories, many of which have been told outside of the mainline movies. One of the most prominent sources since the franchise’s creation has been video games, with studios reimagining Star Wars’ existing stories and characters or creating new ones across dozens of gaming genres, including racing games, shooters, flight simulators, and role-playing games. And though Star Wars games could stand to get a little bit weirder going forward, there have already been plenty of wonderful games that take place in a galaxy far, far away. Below, we’ve rounded up the 10 best Star Wars games.

As a quick note: These games are not listed in the order of best to worst, or vice versa. We’ve simply listed them in the order by which they launched, from 1994’s TIE Fighter to 2021’s Republic Commando Remastered and every game we loved in between. And yes, KOTOR is on the list. You do not have to keep scrolling if you came here just to make sure that we didn’t forget to list KOTOR–we got you. And with a Star Wars: Knights of the Old Republic remake for PS5/PC in the works at Aspyr, there’s never been a better time to look back on the iconic BioWare RPG. We’ll be sure to come back and update this list as new Star Wars games are released, assuming they are good enough to join this list. 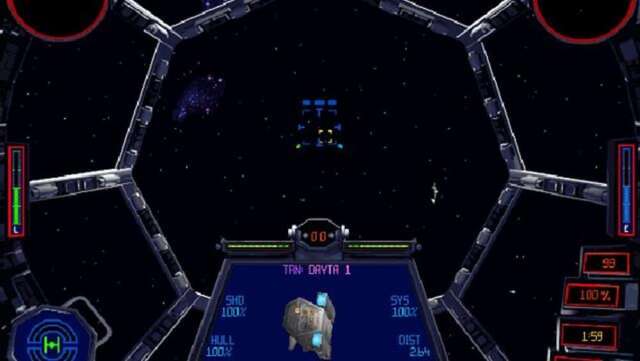 Developer Totally Games’ Star Wars: TIE Fighter is a flight simulator meets space combat game set in the Star Wars universe that wowed fans back in 1994 and surprisingly still holds up in several ways today. It begins immediately following the events of The Empire Strikes Back and continues until the final battle of Return of the Jedi, having you play as a talented TIE pilot charged with going after pirates or traitors to the Galactic Empire. It’s a shame that TIE Fighter is no longer canon, as it tells a superb story about what it was like to be an Imperial during the events of the original Star Wars trilogy. The game provides insight into “the bad guys” of Star Wars, showing that most Imperial soldiers weren’t Emperor Palpatine-level evil. It’s a perspective that other Star Wars video games–like Battlefront II and Squadrons–have tried to replicate, but have never quite done as well as TIE Fighter. Star Wars: TIE Fighter is available for PC. 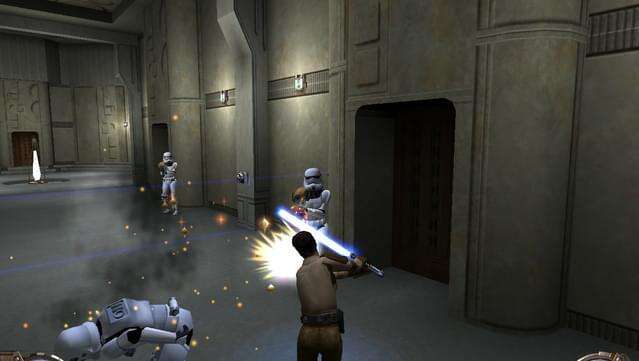 Developer Raven Software’s Star Wars Jedi Knight II: Jedi Outcast is the third game in the Jedi Knight series, which began with 1995’s Dark Forces. The series follows Kyle Katarn, a mercenary-turned-Jedi who briefly embraces the Dark Side and thus can use all manner of Force abilities. In Jedi Outcast, Kyle has forsaken the Force, only to learn that he needs to reconnect with his Force sensitivity in order to combat a threat posed to the New Republic. Jedi Outcast is the point in the Jedi Knight series where combat fully transitions to a hybrid of shooter and lightsaber combat. That, along with the really good single-player campaign, makes Jedi Outcast the best of the Jedi Knight games. Jedi Outcast also sees Kyle meet with several popular Star Wars characters, like Luke Skywalker and Lando Calrissian, providing a look at their lives (admittedly, one that is no longer canon) after the events of Return of the Jedi. Star Wars Jedi Knight II: Jedi Outcast is available for PS4, Switch, Xbox, GameCube, and PC. 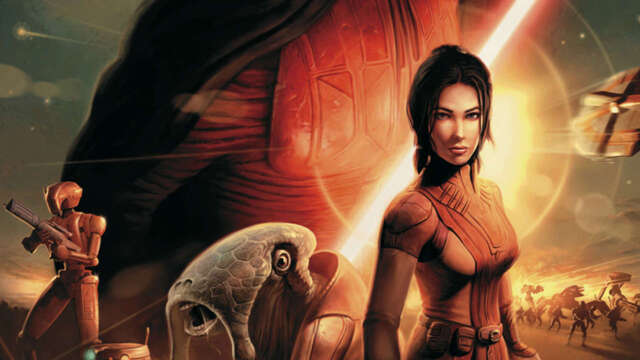 Developer BioWare’s Star Wars: Knights of the Old Republic is beloved by Star Wars fans as one of the best (if not the best) Star Wars games ever made. Set thousands of years prior to the events of The Phantom Menace, KOTOR sees you exploring the Star Wars galaxy in an effort to find a way to stop Darth Malak, a Sith who killed his master, Darth Revan, to take over the Sith armada and launch an invasion against the Galactic Republic and a fractured Jedi Order. Along the way, you recruit new allies, learn Force abilities, and make meaningful choices that influence both how the story ultimately ends and whether you embrace the Light or Dark Side of the Force. KOTOR also introduces some of the best Star Wars characters ever created, such as Jedi Knight Bastila Shan, Twi’lek street urchin Mission Vao, and assassin droid HK-47. Star Wars: Knights of the Old Republic is available on Xbox, Switch, PC, and both Android and iOS devices. As mentioned already, a KOTOR remake is currently in development at Aspyr.

See our Star Wars: Knights of the Old Republic review. 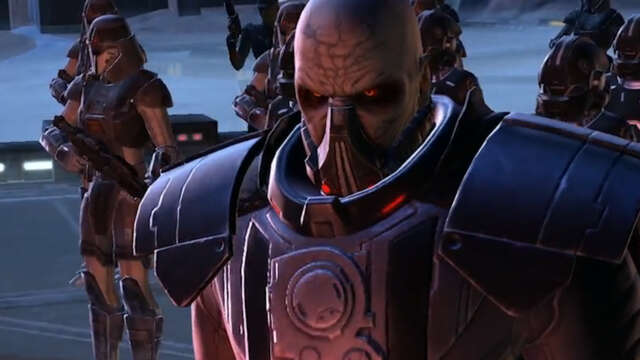 Developer BioWare Austin’s Star Wars: The Old Republic has come a long way since its launch in 2011–this massively multiplayer online role-playing game is still kicking too, with a thriving playerbase and an eighth major content expansion, Legacy of the Sith, coming out in celebration of its 10-year run. Taking place hundreds of years after the events of Star Wars: Knights of the Old Republic, The Old Republic allows you to play through eight distinct storylines during the ongoing conflict between the Sith Empire and Galactic Republic. Each storyline sees you recruiting different squadmates, responding to different moral-based dialogue choices, wielding different weapons and abilities, meeting different characters, and having the chance to fall in love with different romance options. So you basically have eight different story-driven RPGs here, all of which feature missions you can tackle alongside well-written NPC companions or real-world players. Star Wars: The Old Republic is available for PC. 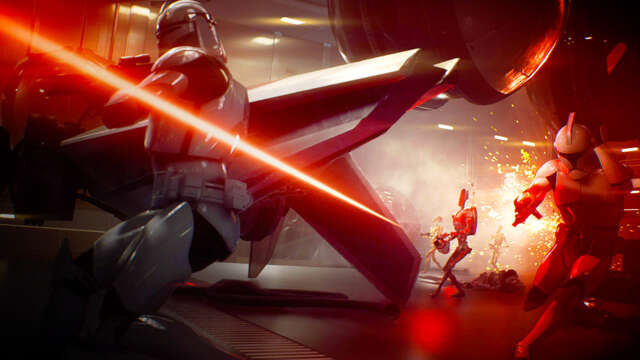 Developer DICE’s Star Wars: Battlefront II (not to be confused with Pandemic Studios’ 2005 game Star Wars: Battlefront II) made an extremely rough first impression in 2017–there aren’t many games that can claim to have a microtransaction controversy prior to their official launch on par with this one. But to the credit of DICE (and support studios Criterion Games and Motive Studios), Battlefront II got substantial post-launch content, balancing updates, bug fixes, and (most importantly) adjustments to how the in-game economy works. It’s now a rewarding game to play, with a decent-but-not-fantastic single-player campaign about an elite Galactic Empire special forces trooper defecting to the New Republic, and an expansive online multiplayer experience with plenty of awesome modes to play. Star Wars: Battlefront II is available for Xbox One, PS4, and PC. 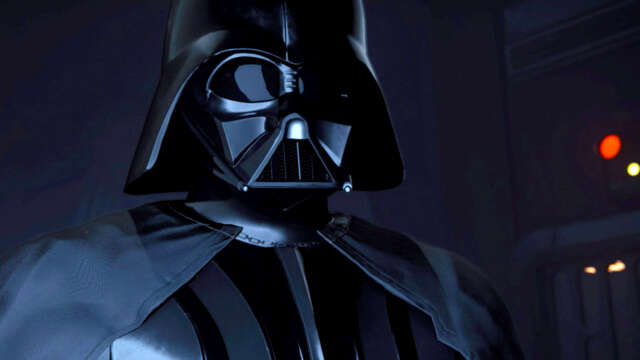 There are very few moments in Star Wars that capture how terrifying Darth Vader is–the final moments of Rogue One: A Star Wars Story, his few appearances in Star Wars: Rebels Season 2, and his adventures in Kieron Gillen’s Star Wars: Darth Vader are the standouts. But that overwhelming sense of fear that many feel when standing in Darth Vader’s presence wasn’t fully-realized within video games until developer ILMxLAB’s Vader Immortal: A Star Wars VR Series. You don’t quite realize just how imposingly tall and intimidating Vader is until he’s looming over you and threatening your life. The game’s story takes place in between Revenge of the Sith and Rogue One, seeing you play as a smuggler who gets caught up in Darth Vader’s attempts to bring Padmé Amidala back to life. Vader Immortal: A Star Wars VR Series is available for Oculus Quest, Oculus Rift, and PSVR. 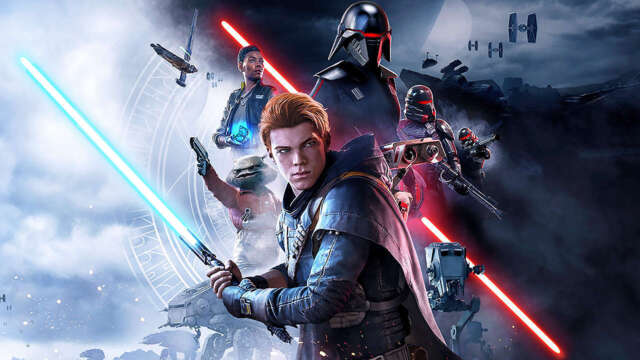 Developer Respawn Entertainment’s Star Wars Jedi: Fallen Order is an action-adventure game that incorporates a Sekiro: Shadows Die Twice-like parry system for its lightsaber combat and takes inspiration from both metroidvania and Souls-like games for its exploration and progression. Taking place after Revenge of the Sith, Fallen Order sees you play as Jedi Padawan-turned-scrapper Cal Kestis, who goes on the run with Jedi Knight-turned-outlaw Cere Junda, pilot Greez Dritus, and droid BD-1 when Imperial Inquisitors Second Sister and Ninth Sister (former Jedi turned to the dark side and trained by Darth Vader) start hunting him. Fallen Order digs deep into some of the themes only glossed over in other Star Wars media, such as understanding yourself enough to fight against your own darkness and knowing how and when to ask for help when tackling an overwhelming adversity. There’s some excellent storytelling going on when Cal meets Nightsister Merrin and the two try to broach common ground through the trauma of watching their respective orders fall. Star Wars Jedi: Fallen Order is available for Xbox Series X|S, Xbox One, PS5, PS4, PC, and Stadia. 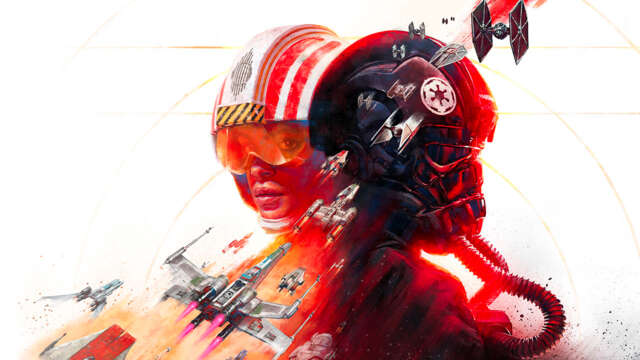 Developer Motive Studios’ Star Wars: Squadrons is fantastic. Though the game’s single-player campaign–which sees you alternate between the newest members of the New Republic’s Vanguard Squadron and the Galactic Empire’s Titan Squadron following the events of Return of the Jedi–isn’t very good beyond acting as a decent story-driven tutorial, online multiplayer is a blast to play. Matches put you into fast-paced 5v5 dogfights where communicating with your team and managing how much energy you’re putting towards your shields, engines, or weapons is just as important as being a good shot. Squadrons is simple to learn but rewards commitment with a high skill ceiling–there are few things as satisfying as finally mastering an advanced maneuver and pulling it off at the end of a match to get the winning kill. Star Wars: Squadrons is available for Xbox Series X|S, Xbox One, PS4, and PC. The PS4 and PC versions can be played in VR. 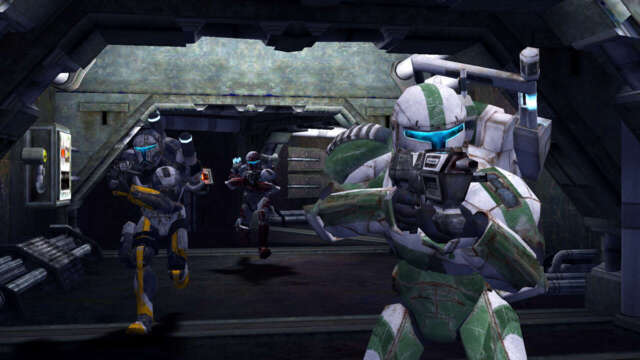 Developer LucasArts’ Star Wars: Republic Commando was one of the earliest stories to explore the identical faces but vastly different personalities of the soldiers that make up the Galactic Republic’s Clone Army. Aspyr Media’s enhanced port is the same excellent game but with prettier visuals, a better control scheme, and no multiplayer (though Republic Commando’s online multiplayer was never that good to begin with). Despite being an older game–Republic Commando first launched in 2005–it’s still wonderful to get to know the members of Delta Squad (Boss, Scorch, Fixer, and Sev) as the four take part in three special ops missions in between the events of Attack of the Clones and Revenge of the Sith. Star Wars: Republic Commando Remastered is available for PS4 and Switch. 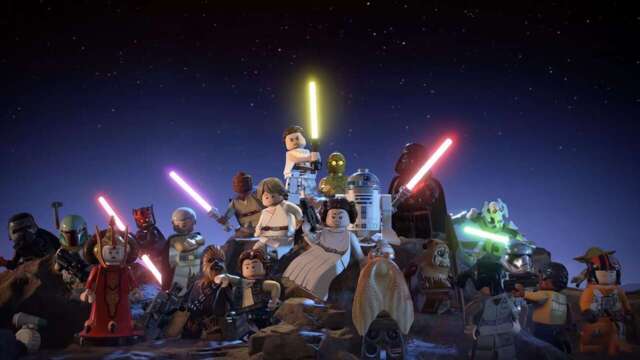 Multiple Lego Star Wars have been released over the years, but the latest iteration is the pinnacle of the sub-series. Lego Star Wars: The Skywalker improves on the sturdy foundation that has been built ever since the first game in Traveller’s Tales sprawling Lego series–Lego Star Wars: The Video Game–released in 2005. The Skywalker Saga features a revamped combat system that makes gameplay feel fresh as well as more differentiated character types that add a ton of variety. Additionally, the visuals are markedly improved over previous Lego games. Yes, there are some visual bugs and performance issues that standout more on legacy platforms and Nintendo Switch, but overall The Skywalker Saga has a gorgeous world that’s a joy to explore.

Where The Skywalker Saga really stands out is in its scope. Containing condensed versions of all nine Skywalker Saga films that can be played in any order, this Lego game is a charming romp through more than 40 years of Star Wars stories that features hundreds of characters. The writing is humorous and fun, and it’s as fun as ever to play through cooperatively with family on the couch.