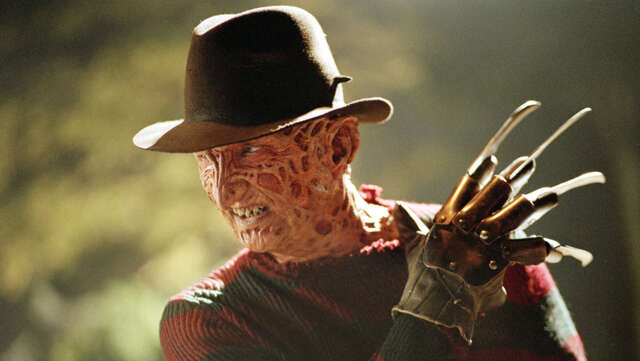 1, 2, Freddy’s coming for you. And chances are when he finds you, he’s going to be pretty creative with how he ends your life. Throughout the entire A Nightmare on Elm Street franchise, Freddy Krueger, as portrayed by Robert Englund, has gone to great lengths to be as creative as possible with his kills.

While it doesn’t always lead to cinematic gold (remember when he killed someone with a Power Glove?), there are plenty of iconic Freddy Kills throughout the eight movies that Englund starred in as the glove-wielding maniac. That’s a lot of movies to dig through to find the very best, though, so we did the work for you.

After all, it’s scary movie season and we’re all looking for ways to add more horror goodness to our lives, right? With that in mind, check out our 12 favorite Freddy Krueger kills of all time. For more spooky content, make sure to check out our review of the Slumber Party Massacre remake, along with the best horror movies made by female directors. 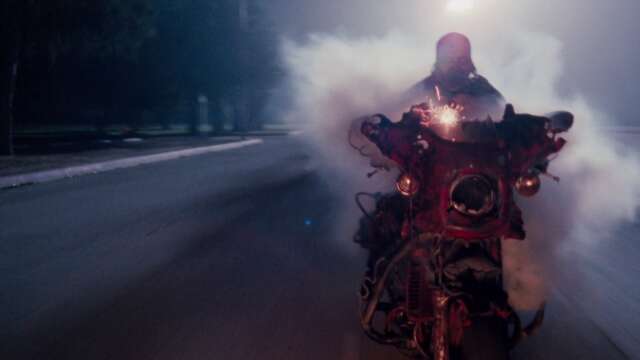 A Nightmare on Elm Street 5: The Dream Child

No, The Dream Child isn’t the best Elm Street movie. It’s not even in the top three. But it’s hard to argue that Dan’s death, after being essentially consumed by his own motorcycle and turned into a cyber-horror of a monster that is ultimately steered into oncoming traffic, is downright horrifying. It also helps that the melded human/motorcycle design looks almost like something out of the mind of HR Giger. 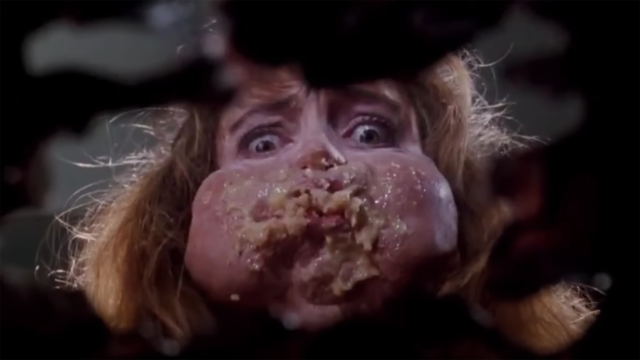 A Nightmare on Elm Street 5: The Dream Child

By The Dream Child, Freddy had gone pretty far down the silly path. After all, that’s the movie with the giant-sized super Freddy. Of the more comedic deaths, Greta stands out. The would-be supermodel is overfed, made to eat her own organs, and ultimately chokes to death. What a gross way to go. 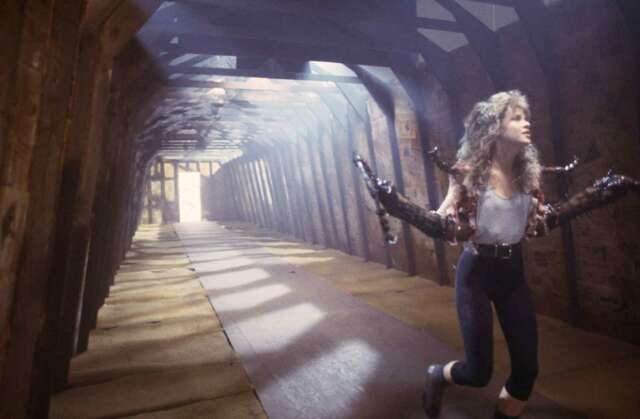 A Nightmare on Elm Street 4: The Dream Master

If strange body horror is your jam, you should definitely revisit The Dream Master, in which a girl transforms into a cockroach. It’s incredibly disturbing, watching the roach’s limbs grow out of hers. 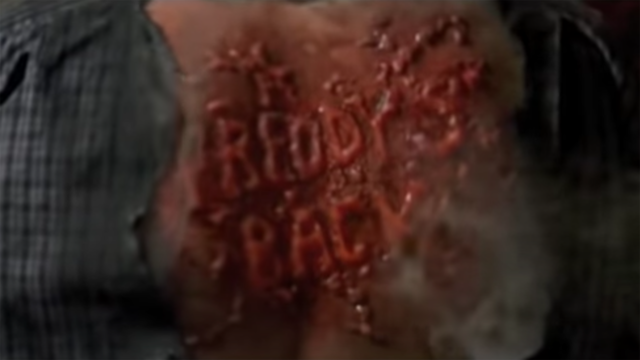 Freddy vs. Jason is a fun movie, that’s for sure. But it’s not filled with memorable deaths. That said, Mark’s demise stands out. Freddy burns him alive in his own bedroom, while Lori and Will are forced to watch from outside. Then, after he’s dead, Freddy gets in one last joke. He burns the words “Freddy’s back” on, of all places, Mark’s back. Not a bad way to let the local youths know you’ve come for them. 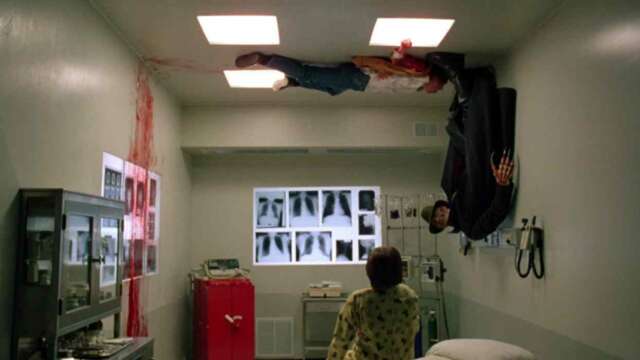 This one makes the list because of its historic significance. While watching over Heather’s young son, Julie finds herself on the wrong side of Freddy and gets dragged by the maniac up a wall and across the ceiling as he brutally murders her. This is a callback to the first Elm Street movie, in which Tina dies in the same manner (we’ll talk more about that later). What’s different here is the special effects have gotten much better and the budget much bigger, allowing the movie to actually show Freddy doing the horrible acts, rather than just seeing his victim ripped open.

7. Nails on a chalkboard 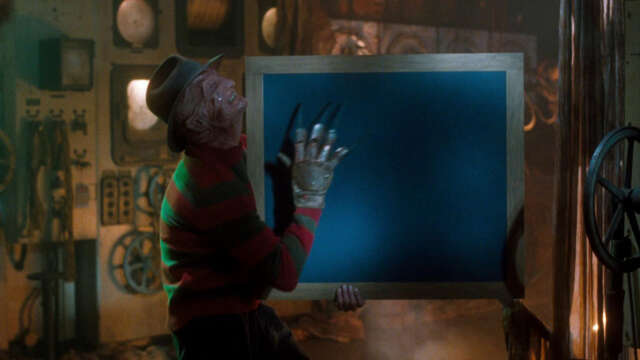 With a demonic hearing aid amping up the volume, this particular teen in Freddy’s Dead got an earful thanks to Freddy’s signature glove and a chalkboard. Honestly, it’s surprising it took this long for this particular death to happen. But who among us hasn’t envisioned our heads exploding when someone ran their nails down a chalkboard? 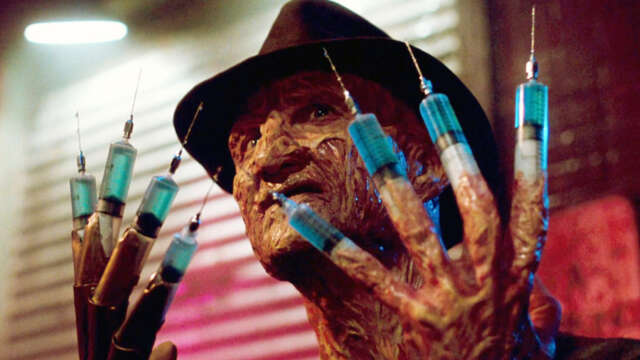 At first, Taryn and her magnificent mohawk may have thought they were getting the best of Freddy, but we all knew better. When his fingers turned into drug syringes and the healed track marks on her own came to life, her fate was sealed. “Let’s get high,” Freddy says before plunging the drug-filled needles into her. 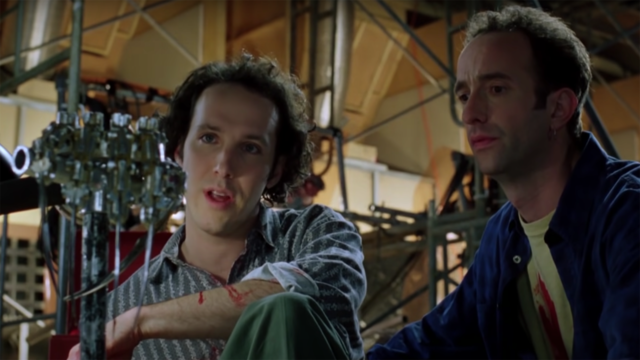 It’s been said before that without New Nightmare, chances are Wes Craven probably wouldn’t have made a movie like Scream. This film is filled with so many meta moments that it can be hard to keep track of. That said, watching a movie prop of the new Freddy glove come to life and kill two members of the crew is a pretty heinous moment and one of the best ways you could possibly kick off this underappreciated film. 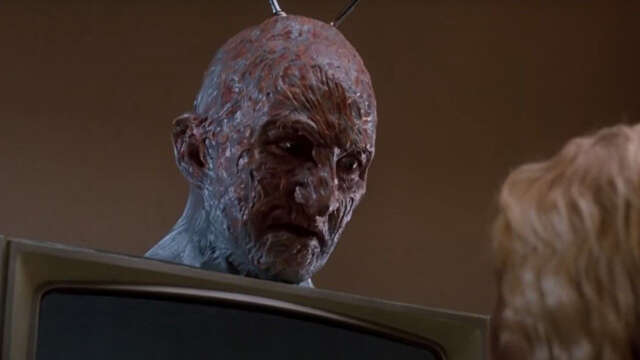 Yes, Jennifer’s head gets smashed into a TV and that’s cool. But this kill stands out for one reason, and it’s the iconic line, “Welcome to primetime, b****.” It might be the most-repeated Freddy line in franchise history. 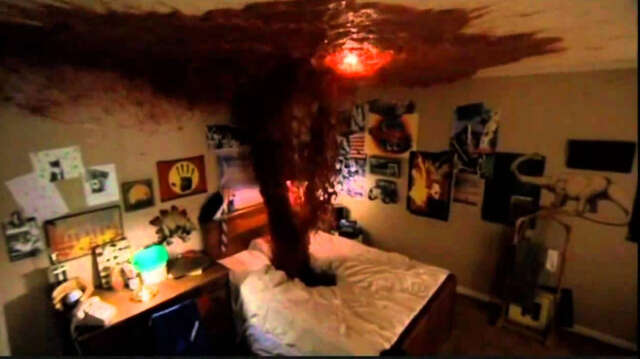 A Nightmare on Elm Street

RIP Johnny Depp. Poor Glen almost made it to the end of the first movie, but Freddy had other plans. In one of the bloodiest moments of the film, Nancy’s boyfriend is essentially eaten by his waterbed, which then vomits blood like a geyser coating Glen’s room in, well, Glen. What a sight to behold. 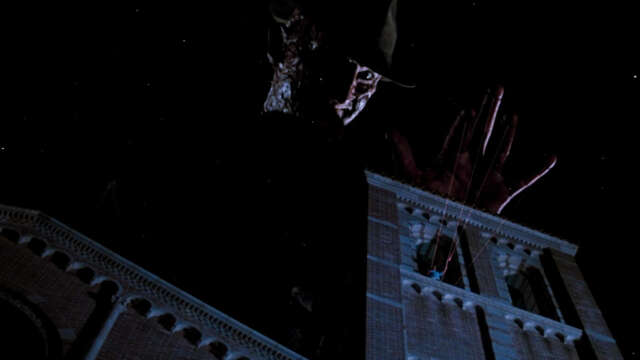 Poor Phillip never stood a chance. In Dream Warriors, he becomes a mere puppet to Freddy, who uses the teen’s own veins and muscles to walk him like a marionette up to the tallest point of the asylum they were in, walking him right off a ledge and to his death. Visually, it’s one of the most striking moments in the franchise and the fact that all of his friends had to watch while helpless was just heartbreaking. 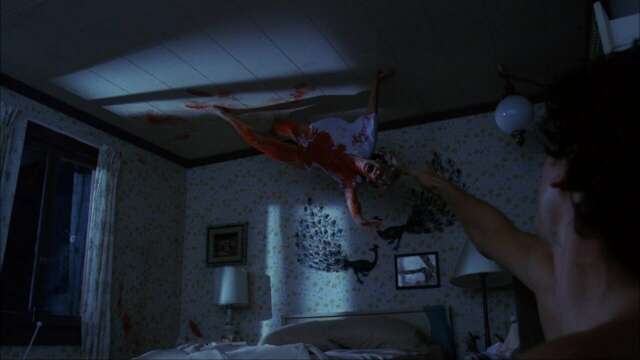 A Nightmare on Elm Street

Here it is, the most iconic Freddy Krueger kill of all time. We spoke earlier about the recreation of this moment in New Nightmare, but there is no topping the original. In the first Elm Street film, Nancy’s best friend Tina is killed in her sleep, dragged up a wall and across a ceiling by Freddy, her blood splattering everywhere while her helpless boyfriend stood by unable to do anything about it. For such a low-budget film, it’s a wonderful moment and one that was made possible by building the room she was in on a giant spinning device. With the camera mounted and the room spinning, the actress was able to move up the walls and all over the ceiling simply because the room was being tipped upside down. Those are some seriously creative visual effects.