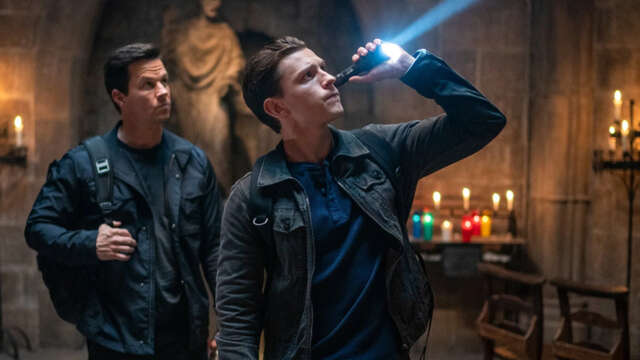 Earlier this year, the Uncharted movie was released, and in the grand scheme of video game adaptations, it was one of the better ones. Now, the film has arrived on 4K UHD, Blu-ray, and on digital markets, and with all the special features, we’ve learned a few more things about the 2022 film.

The Blu-ray and 4K UHD release contains commentary from director Ruben Fleischer. Over the course of the film, Fleischer discusses every aspect of making Uncharted and working with the cast. However, there are plenty of tidbits of information revealed that are really interesting and give better insight into the story and moviemaking.

Below, you’ll find 10 things we learned about the Uncharted movie thanks to the director commentary. This may be the first of many Uncharted films, as Sony called the movie the start of a franchise back in February. While in theaters, the film grossed almost $400 million globally, and in GameSpot’s Uncharted review, Phil Hornshaw said, “Uncharted is a lot of fun a lot of the time. It might not do much that the games haven’t already, but fans will enjoy a new Uncharted tale that at least brings its own flashy, death-defying treasure hunt into the fold.”

1. These actors are the same height 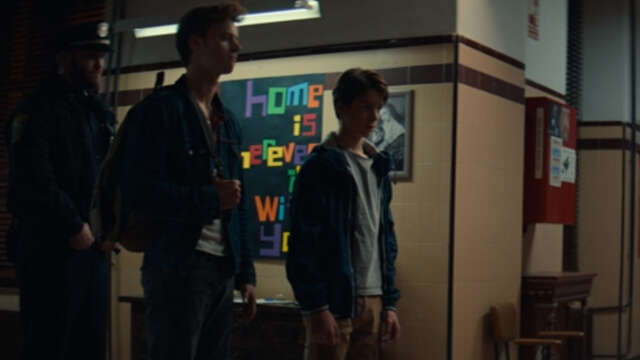 Early on in the movie, we see a young Nathan (Tiernan Jones) and young Sam (Rudy Pankow), and while Sam is the older brother of Nathan, Fleischer reveals they’re actually the same height. During filming, Rudy stood on apple boxes to make him taller than Tiernan, and that’s why in shots showing both of them, you never see their feet.

2. This is mostly practical 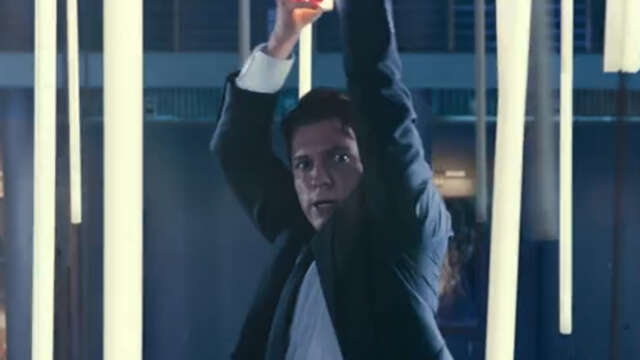 For this sequence, Tom Holland made the leap and held onto the lights–with help from a wire. He got help from the stunt team, but it was all him. It happened in the room, with only one shot being on a green screen. 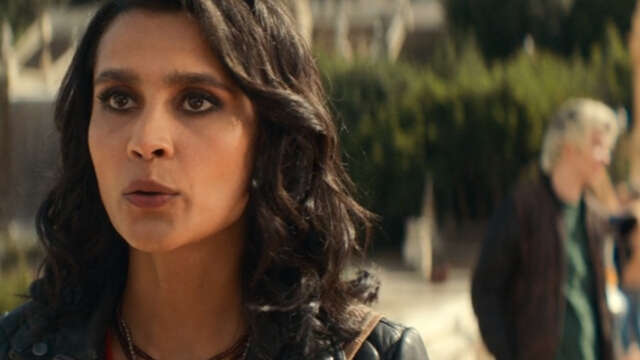 Behind Chloe (Sophia Ali), Matt Holloway and Art Marcum–the writers of the movie–are hanging out (offscreen in the image above) and talking to Spanish gamer El Rubius–he’s the one with the blonde hair. 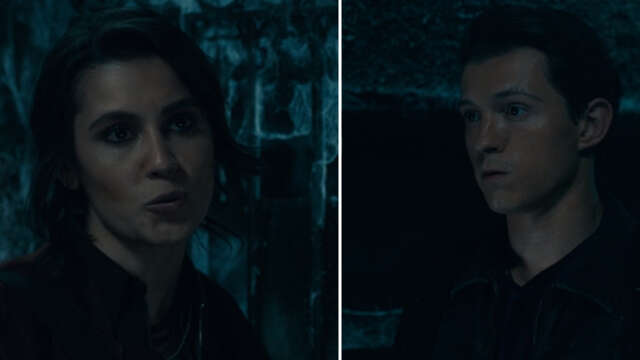 This scene between Nathan and Chloe in the catacombs is shot on two different continents. Holland is in Madrid for this particular part and Ali is in Australia on a green screen. Sophia was directed remotely over an iPad while Ruben was at home in New Jersey.

5. How this scene works 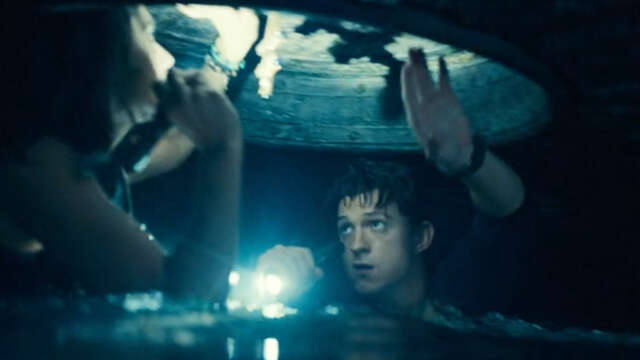 While it may look like the water level is rising here as Chloe and Nathan struggle, it isn’t. According to Fleischer, when doing a scene like this, you build a tank, and submerge the set into it while filming. So the water isn’t so much rising as the set is being dunked into a giant swimming pool. 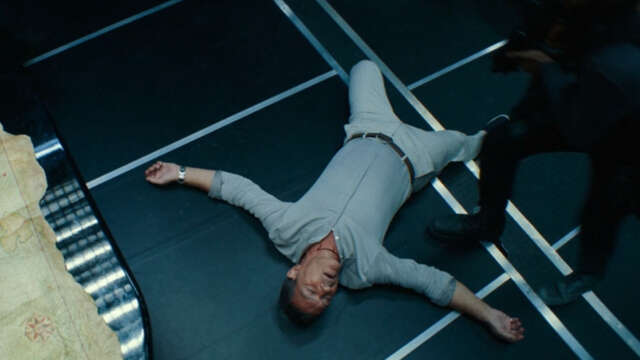 There were more graphic versions of Santiago’s throat being slit by Braddock. While Fleischer doesn’t go into too much detail, he believes they went the right direction though by picking the more tasteful version. It seems earlier versions may have contained a bit more blood. 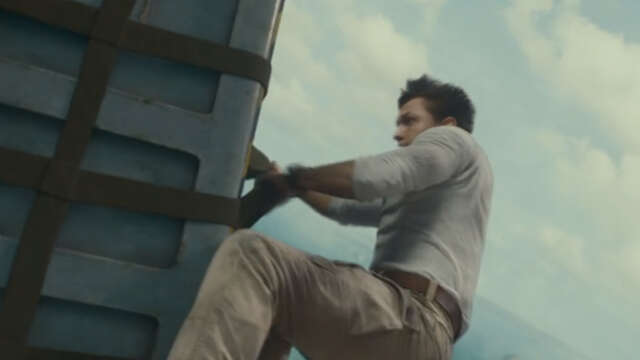 Drake and Chloe jumping out of the plane onto the car looks like one shot, but it’s actually seven shots, jumping between digital doubles and the actors on a green screen. The scenes are so seamless, it’s hard to tell when it’s the actors and when it’s the digital doubles. It took a year of digital effects to make that scene work. 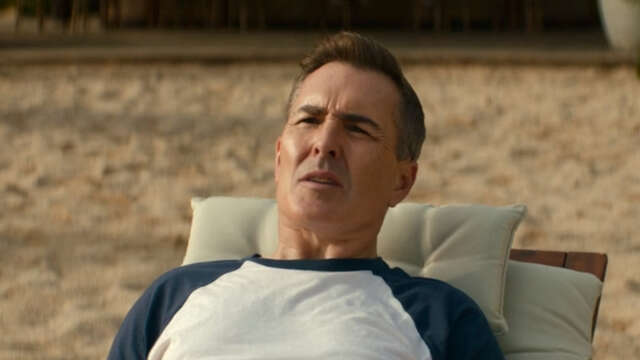 If you’re a fan of the video game series, then this cameo is pretty obvious to you. When Nathan and Chloe end up on the beach and talk to a man in a beach chair, that’s Nolan North–the voice of Nathan Drake in the Uncharted games.

9. The original ending of the movie 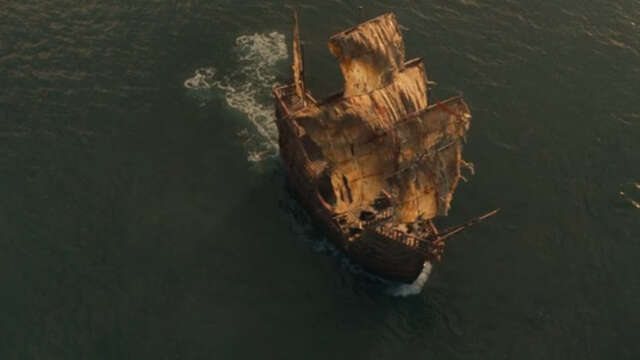 Originally there was an ending with Chloe in the water scavenging for gold from Magellan’s ship. 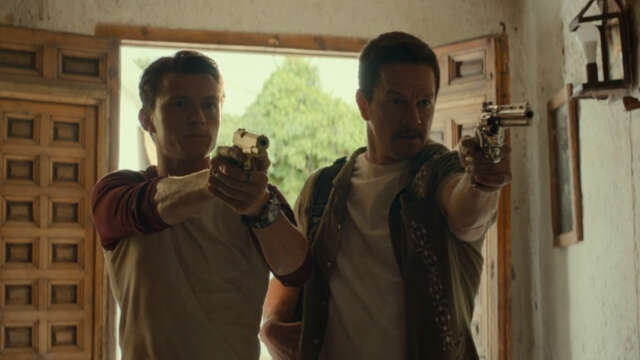 The final scene is indicative of where Nathan and Sully are headed. Aside from the fact the viewer gets a glimpse of where these characters will head next, we also get Sully with the mustache, mainly to match his look from the games. The duo also has outfits that match the games as well.