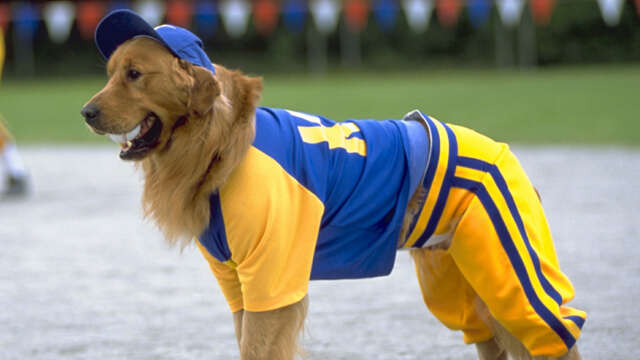 Sports movies can be uplifting and highlight a human’s triumph against great odds–many times, those odds are about moving a ball, but I digress. And the only way to make a movie like that even more appealing is to throw a chimpanzee or golden retriever in it, right? Of course, there have been plenty of movies about animals playing sports to really uplift our spirits.

And looking through the history of cinema, we found 15 movies featuring animals playing human sports and most of them aren’t even Air Bud., But boy-oh-boy, you’re about to be surprised with how many movies are in that particular franchise–it’s 18, but most of them aren’t about sports. Here are 15 movies featuring animals playing sports for some reason in chronological order. 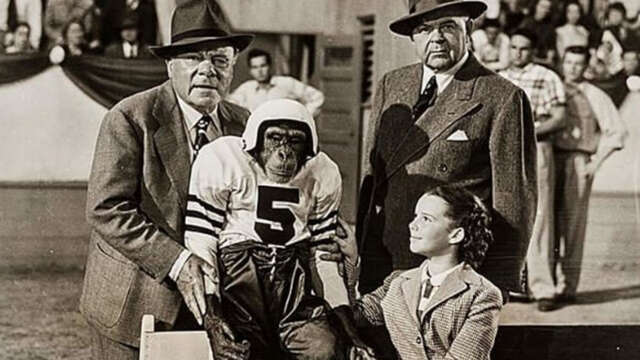 A follow-up to the 1951 Ronald Regan movie about an ape and a college professor and an experiment about genetic theory and inherent traits–a sentence that hurts my brain–the Regan-less follow-up follows Bonzo (that’s the ape) as he goes to college. The focus here isn’t on sports though. Bonzo does get involved in golf and joins the college football team, but he’s mainly just a wacky college student. 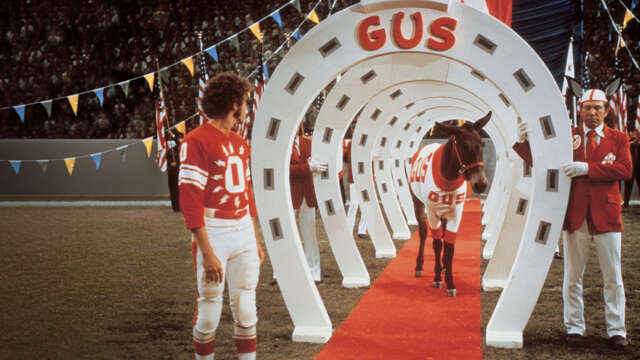 Remember a time when Don Knotts was in every single family comedy? At least, it felt that way. Anyway, Knotts plays the coach of the very notable NFL team the California Atoms, and the team isn’t doing well. So they recruit a mule that can kick 100 yard field goals. How is that going to win games when your team is horrible? That is the real question. Hey, it’s not in the rules that a mule can’t play football! 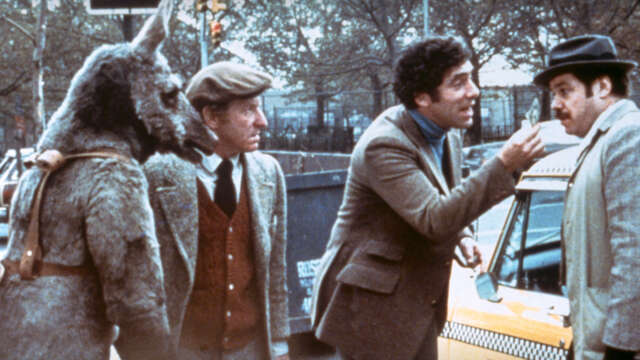 In a movie that will make you want to play Tekken, Matilda is about a boxing kangaroo. What sets this movie apart from the others is that Matilda is actually a man in a kangaroo suit, and it could not look any sillier. Stuntman Gary Morgan (Logan’s Run, Back to the Future III) put on the costume and boxed his way through our hearts. It’s the silliest-looking thing, and this is the only example on this list where the film said, “Screw using real animals. Let’s get a person in a suit!” Bless them for this decision. Hey, it’s not in the rules that a kangaroo can’t box! 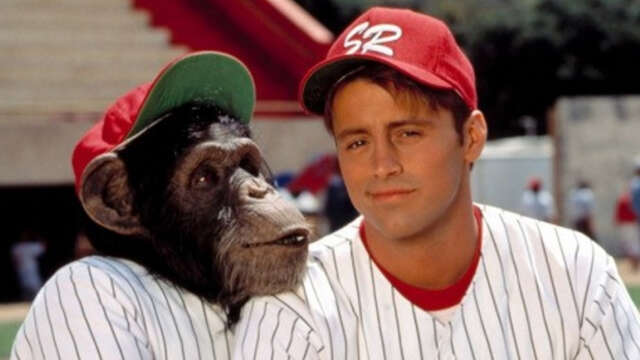 While the ’80s was concerned with bringing kids to space, the future, the past, or to a lair of monsters under their beds, the ’90s brought us all back to animals competing in sports kicking off with Ed. The Matt LeBlanc vehicle features him as Jack Cooper, a minor league pitcher who has to work with a chimpanzee, the team’s new third baseman. Of course, a lot of “monkeying around happens in the process.” Actually, this statement is false. Chimpanzees are apes, so it would be a lot of “aping around,” which makes no sense. Anyway, Matt LeBlanc. He did it. Hey, it’s not in the rules that an ape can’t play baseball! 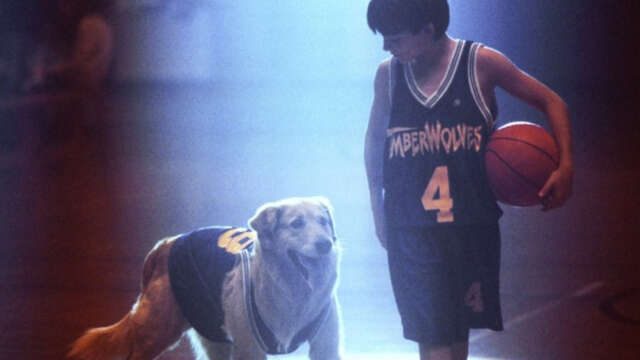 Finally, the movie you’ve been waiting for, Air Bud. This is kinda based on a true story–not joking–as Kevin di Cicco found a stray dog, and he taught the dog to play sports, and the dog loved basketball. That dog in question is actually the star of the first Air Bud movie, which follows Buddy, a circus dog who escapes his imprisonment and joins a school basketball team. However, this new position on the team draws a lot of media attention, and Buddy’s former owner is trying to get him back–and he’s a skeevy dude, so that doesn’t bode well. Also, the dog scores a bunch of points in basketball games. Hey, it’s not in the rules that a dog can’t play basketball! 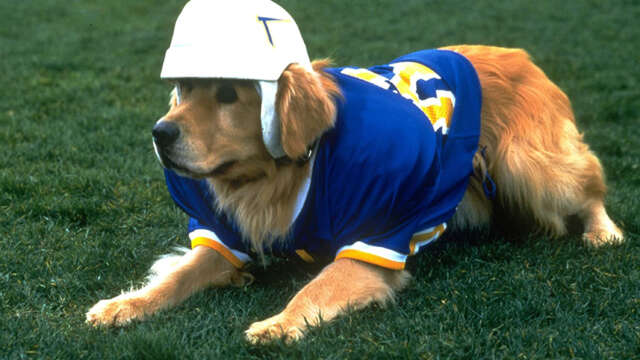 After the original Air Bud was a huge hit–relatively speaking, as it only made $23 million worldwide–it was time for a follow-up. And where do you go from basketball? Obviously, you make a football team. Much like Little Giants–the greatest Rick Moranis/Ed O’Neil movie to ever be made–Air Bud: Golden Receiver follows a group of lovable losers who are in need of a star player in order to win their championship. They find a dog who can play football, and the rest is history. Hey, it’s not in the rules that a dog can’t play football!

If you’re wondering if this is the same dog from Air Bud, get ready for a downer. “Air Buddy”–that’s the name of the good boy from Air Bud–passed away after a battle with cancer in 1998. Sorry to ruin your day. 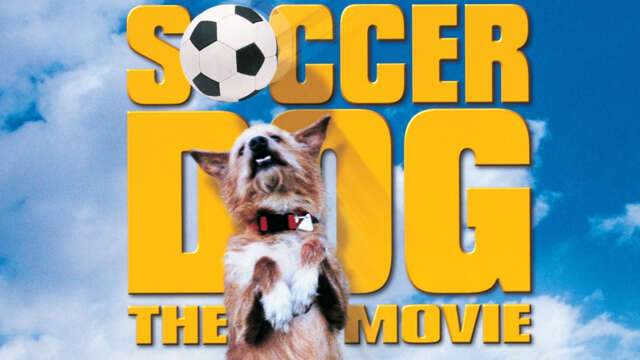 Anyway, back to bad movies and bad jokes. Soccer Dog: The Movie… Luckily, this film let’s us know it’s a film and not just an idea said aloud on accident at a pitch meeting. “Soccer Dog: The Movie.” Anyway, picking up a sport that Air Bud had yet to tackle–don’t worry, it will–this movie is about a new kid in town who befriends a dog who can play soccer and the duo team up to win a soccer championship. Oh, there’s also a dog-catcher after the dog. Basically, it’s the plot to the original Air Bud, but with soccer and a dog not as adorable as Air Buddy. Hey, it’s not in the rules that a dog can’t play soccer! 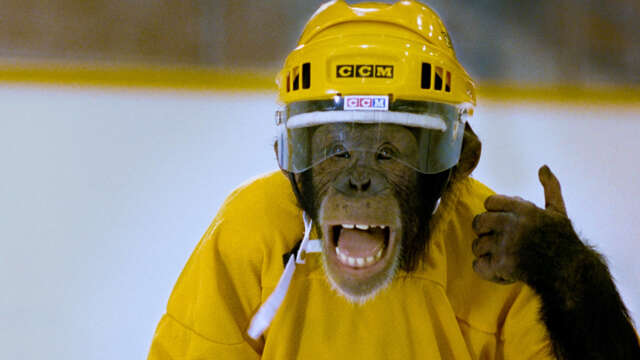 Movies about dogs playing sports were so ’90s. Now, we’re in the 2000s, and it’s all about primates. MVP follows Jack, a chimpanzee that knows sign language who escapes to Canada after the science lab he lives in becomes a medical lab. Anyway, people in Canada learn that Jack has a natural ability to play hockey. Hey, it’s not in the rules that an ape can’t play hockey! 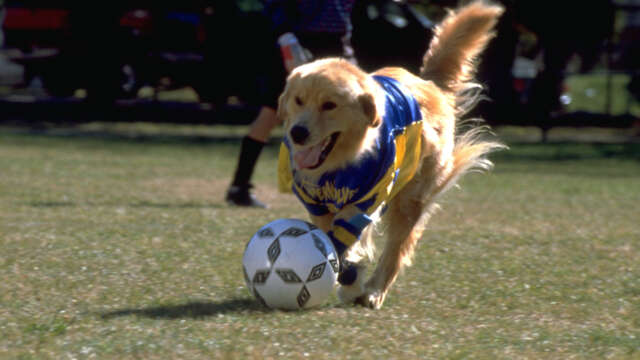 Most likely as retaliation to the production of Soccer Dog: The Movie, the third Air Bud movie was released in 2000. Air Bud: World Pup finally tackles the regulation of animals playing sports. Buddy, the dog who can play sports, finds love with a dog named Molly and the two have puppies–this is the most important moment for the Air Bud series and the most important sexual relations in all of cinema. Buddy joins a soccer team and is the best player, but the committee for the league decides, “Hey, no.” Buddy’s teammates all quit, and I can’t believe I’m still writing about animals playing soccer. Anyway, this movie ends with Buddy helping the USA’s women’s soccer team win the FIFA Women’s World Cup. That’s not a joke. That happens. Hey, it’s not in the rules that a dog can’t play soccer! I mean, they tried here, but couldn’t get it done. 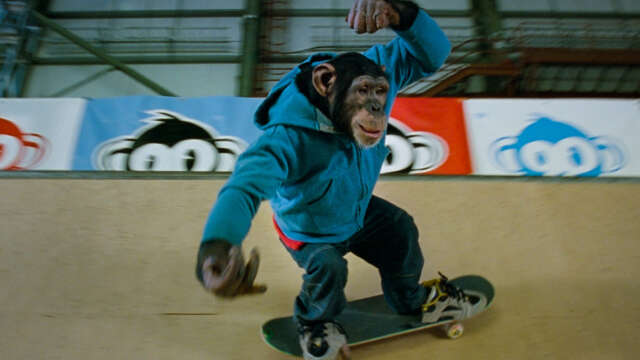 Jack, the hockey-playing chimp from MVP, realizes he can skateboard–and by skateboard, we mean “ride a halfpipe.” This movie is really about a runaway named Ben, who discovers Jack. Ben is looking to be a professional skateboarder, and he and Jack are taken in by Oliver “Ollie” Plant (get it? ollie) who is played by Richard “I Don’t Think So, Tim” Karn. Ben and Jack skateboard together, and Ben wins a skateboarding competition where the prize was a sponsorship from Bob Burnquist–a big deal in 2001. Jack also skateboards during the competition. Hey, it’s not in the rules that an ape can’t participate in competition skateboarding! After all is said and done, Ollie adopts runaway Ben–whose parents are probably really worried about him. 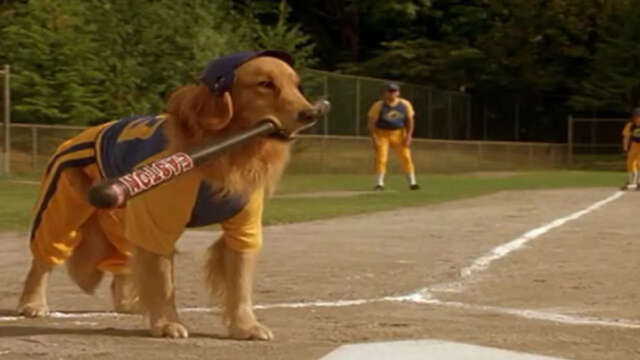 Air Bud hits a homerun with the title of this movie. Stay with us because this plot gets wild. The movie follows Buddy once again and he joins a junior high baseball team. So far, so good. Richard Karn is in this one too, and there’s nothing out of the ordinary thus far. Anyway, a raccoon is dognapping Buddy’s puppies for some researchers who think Buddy’s family carries special genes that give them the abilities to play sports. 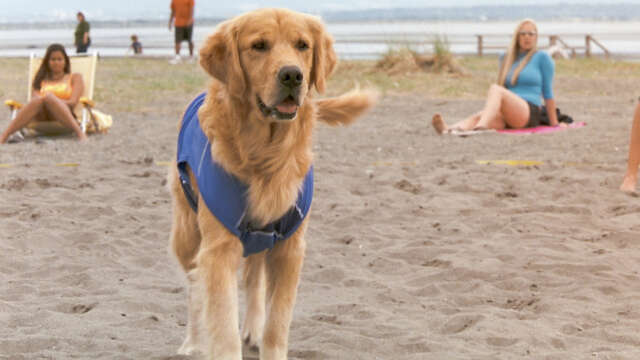 Guess what? Buddy learns he can play volleyball too. Buddy teams up with a talking parrot to take down some diamond thieves. This is the film where the franchise truly lost its way, as it’s just too zany to take seriously. How am I supposed to believe a dog has time to win a championship with a volleyball team and stop bumbling diamond thieves? Hey, it’s not in the rules that a dog can’t play volleyball! 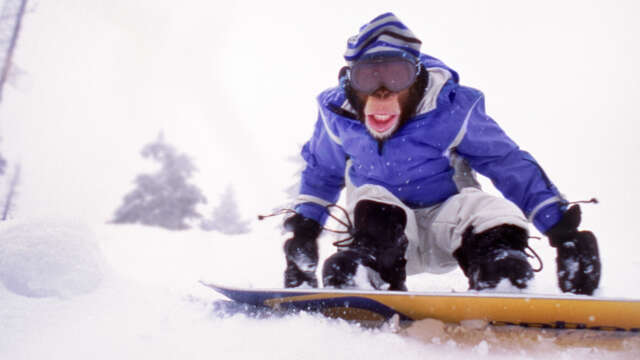 Confusing longtime fans of the MVP series by replacing the “V” with an “X,” Most Extreme Primate (MEP) fires back at the Air Bud series with a familiar plot. Frankly, all of these plots are the same, but I digress. Hockey/skateboarding/runaway boy enthusiast and primate Jack has found himself teaming up with a snowboarder to take down some bumbling thieves. Also, they have to win a snowboarding competition. Hey, it’s not in the rules that a dog can’t participate in competition snowboarding! 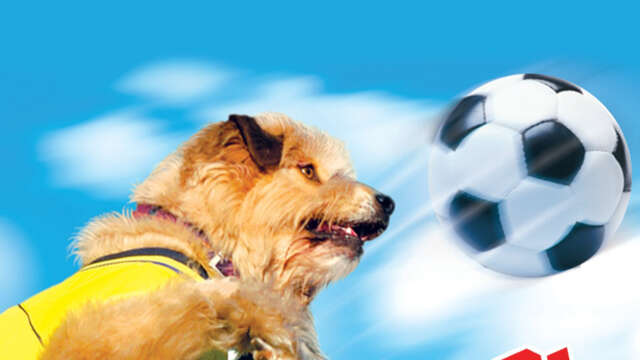 Wait. Is this a movie? I have no way of knowing this time! All jokes aside, I just don’t know if we have it in us to hear about another movie with a dog playing a sport. The Air Bud series has already crushed it on multiple levels. Hey, it’s not in the rules that a dog can’t play soccer! Again, it really should be at this point. How many times does this need to happen before someone makes a ruling against this?

The trailer for Soccer Dog: European Cup has everything you’d love to see in a straight-to-video movie in the late ’90s, but in the year 2004. It has a drill sergeant in charge of kids, like Damon Wayans in Major Pain. It has an animal joining a local sports team, like every Air Bud movie. It has ska–more specifically The Aquabats–like well, the ’90s–when ska was in every trailer. It also has Italian mob-stereotypes to remind people of Martin Scorsese’s movies and to rewatch The Sopranos. I have spent way too much time talking about the Soccer Dog sequel. 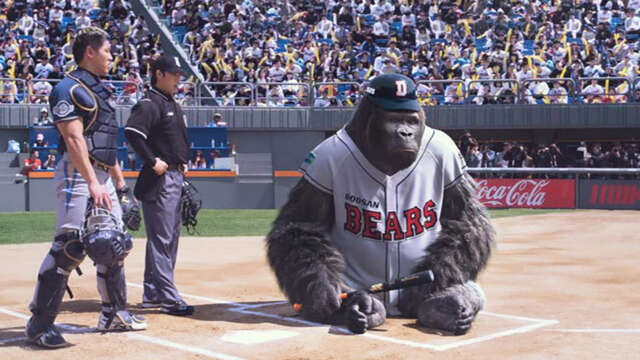 Finally, there’s Mr. Go, a film about the very first gorilla playing in the Korean baseball league. Wei-wei is a 15-year-old circus ringmaster who is left with the gorilla Ling-Ling after her grandfather passed away. Because grandfather loved baseball so much, Ling-Ling learned to play. Of course, this leads the primate to play in the big leagues in Korean. Hey, it’s not in the rules that an ape can’t play baseball!

Strangely enough, out of every movie on this list, Mr. Go looks the best, at least from the look of the trailer.