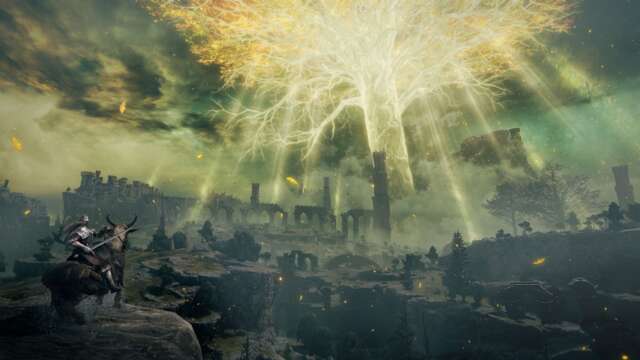 Weapons in Elden Ring are a crucial part of nearly every character build, whether you’re focused on dealing massive damage with powerful strikes or you prefer dual-wielding quick blades. They’re the focal point for any player trying to make their way through the Lands Between with as few deaths as possible, but they aren’t all equal. While the weapons players can use will depend on the points they put into each Attribute, they can always respec their points after defeating Rennala, Queen of the Full Moon. Whether players want a weapon for the long haul or simply want to try out different methods of combat, we’ve compiled a list of the top weapons in Elden Ring. This list is categorized by weapon type, with each category containing one or two weapons. Not every weapon category available in the game will be present, though.

We’ve also taken the point in Elden Ring when players can unlock these weapons into consideration. As an example, the Sacred Relic Sword is a fantastic weapon but players can only unlock it after defeating the final boss. Players who don’t want to take on Journey 2 in New Game Plus won’t be able to make use of that weapon in Elden Ring. The weapons on this list will be usable at some point before the final boss fight.

Sword of Night and Flame 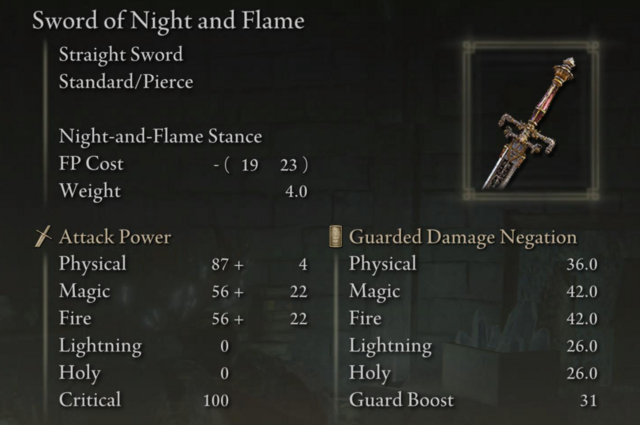 While this weapon was nerfed by the developers at From Software, it still possesses great power for Strength/Dexterity or Intelligence/Faith builds. The reason why the Sword of Night and Flame is so powerful is because of its pre-equipped Ash of War, Night-and-Flame Stance. This ash can decimate enemies around the player in one fell swoop. Players are also receiving the benefit of dealing three types of damage with the straight sword in physical, magic, and fire. The Sword of Night and Flame’s power isn’t what it once was at the beginning of the game, but it’s still worth it for players to try out. Players can find this straight sword in Carian Manor by going to the Manor Upper Level Site of Grace and dropping down to a room on the ground floor. 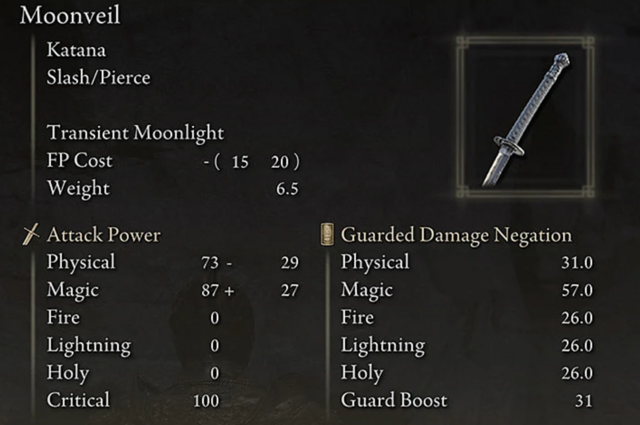 This is the Katana that swept through the community during the early stages of Elden Ring’s release. Players immediately discovered that the Moonveil katana was arguably the most powerful blood-loss weapon in the game. Along with having the blood-loss passive effect, the Moonveil also features the devastating Transient Moonlight Ash of War. This ash shoots out a stream of light after players have completed a light or strong attack. This light can then stagger enemies and break their poise with one hit. The Moonveil katana also deals both physical and magic damage, making it a dual-threat for multiple builds. Players can loot the Moonveil by defeating the Magma Wyrm in Caelid at Gael Tunnel. 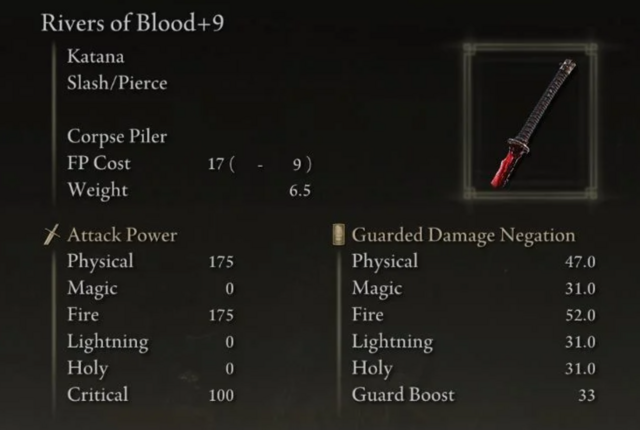 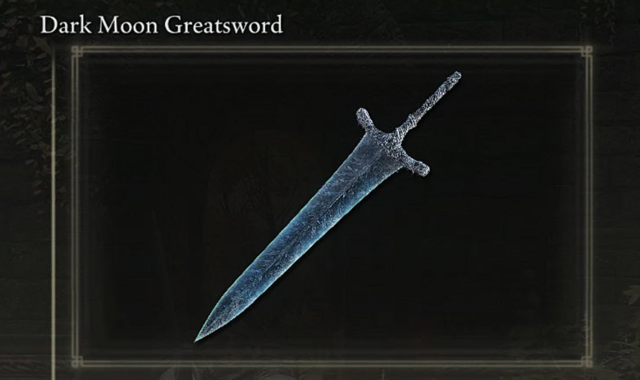 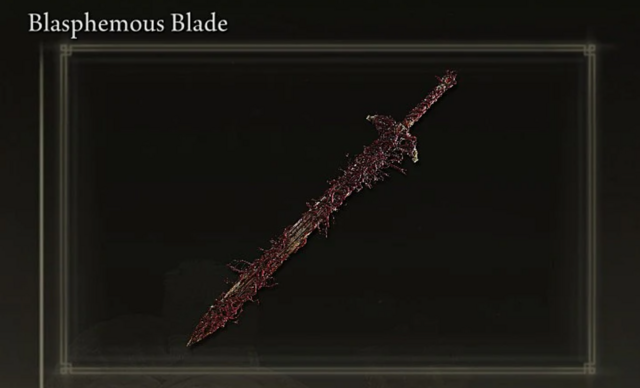 The Blasphemous Blade is nowhere near as powerful as the Dark Moon Greatsword but also doesn’t feature the stat requirements of that weapon. Players only need 22 Strength, 15 Dexterity, and 21 Faith to wield this blade. This greatsword deals additional fire damage while also healing the player 4% of max HP plus an additional 40 HP upon every enemy death. The blade’s Ash of War, Taker’s Flames, increases this healing buff in addition to dealing fire damage. Players can unlock the Blasphemous Blade through Finger Reader Enia after defeating Rykard, Lord of Blasphemy, and claiming his Remembrance. 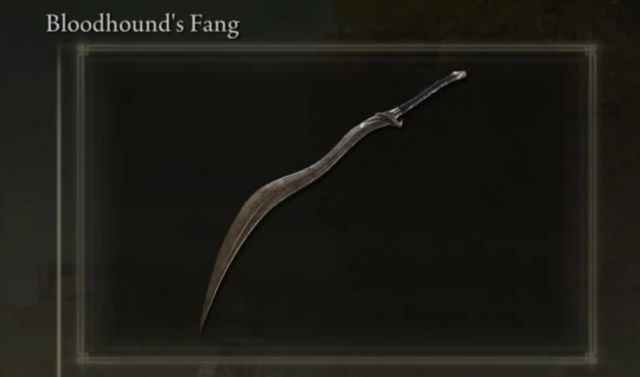 Bloodhound’s Fang is arguably the best early-game weapon in all of Elden Ring. Players can loot it within a few hours of playing, assuming they’re skilled enough, and it has the ability to be the weapon players are holding when they defeat the final boss. It scales marvelously with Strength and Dexterity and also doesn’t feature any ridiculous stat requirements. If players scale correctly, they can exceed 600 damage with each hit from the Fang. Not to mention the sword’s Ash of War, Bloodhound’s Finesse, lets players strike twice while moving swiftly around an enemy. The Bloodhound Fang is the choice for the best Curved Greatsword due to its low requirements, unlock point, and overall scaling. Players can unlock the Bloodhound’s Fang by defeating Bloodhound Knight Darriwil at the Forlorn Hound Evergaol in Limgrave. 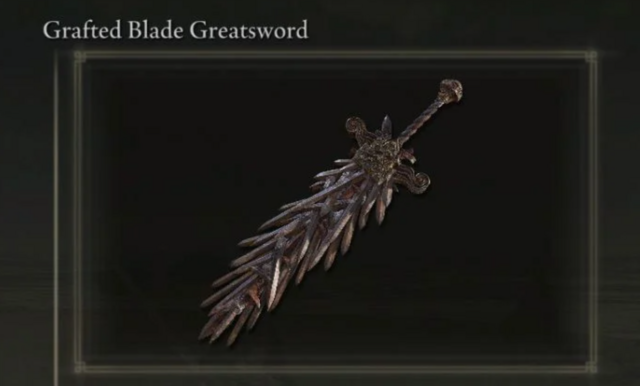 The Grafted Blade Greatsword is a hugely powerful Strength-build weapon that comes with a high stat requirement of 40. However, if players manage to get there, they will have the ability to demolish enemies in one to two hits. This colossal sword has high physical damage that scales great with Strength and a devastating Ash of War, Oath of Vengeance. This ash boosts all of the player’s Attributes for 30 seconds in addition to increasing poise. For tough boss battles, there’s arguably not a better weapon to use if players have 40 points in Strength. Players can loot the Grafted Blade Greatsword after defeating Leonine Misbegotten at Castle Morne in Weeping Peninsula. 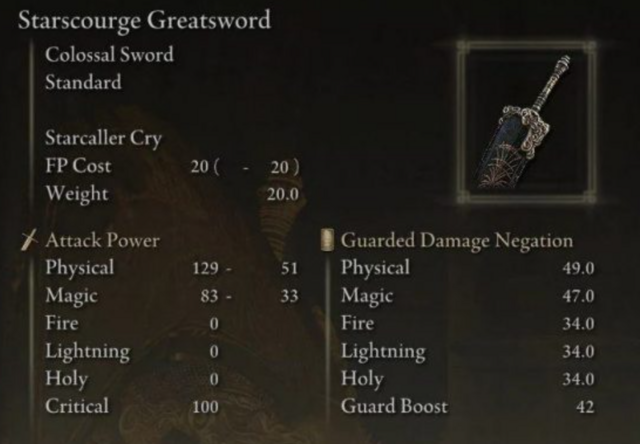 In Elden Ring, players can acquire two colossal swords by defeating the demigods Starscourge Radahn and Maliketh, The Black Blade. While Maliketh’s Blade is certainly worth a spot on this list, we’re going with the Starscourge Greatsword due to its earlier unlock point in Elden Ring. The stats on the weapons aren’t different enough to warrant players waiting until they defeat Maliketh. The Starscourge Greatsword deals a solid amount of physical damage while also adding in magic damage. It can also be dual-wielded, which gives players an additional moveset and more damage with each swing. The Ash of War, Starcaller Cry, is fantastic at clearing out enemies. Players can use Starcaller Cry once to suck enemies in and then again to pound both swords into the ground and send out a gravity explosion. 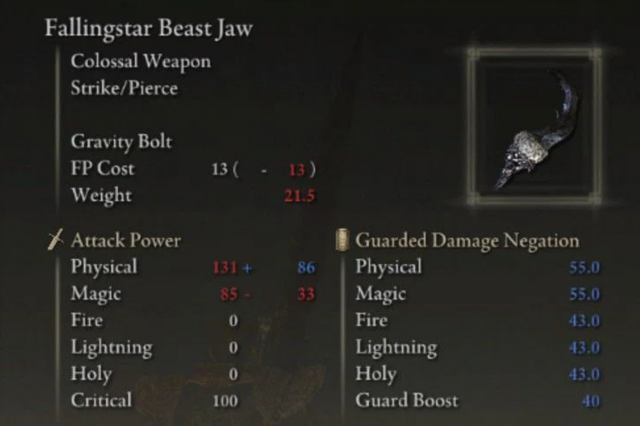 The Fallingstar Beast Jaw is the only colossal weapon in Elden Ring to feature more than just physical damage. This “sword” also deals magic damage but doesn’t require a high Intelligence stat to wield (20). Of course, it does require high Strength, 34, to use but that shouldn’t be an issue for Strength-focused builds. The Fallingstar Beast Jaw scales with both Strength and Dexterity and features a terrific Ash of War, Gravity Bolt. This ash sees players send a bolt of lightning down onto enemies, dealing physical, magic, and poise damage. Players can unlock this weapon by defeating the Full-Grown Fallingstar Beast in Mt. Gelmir. 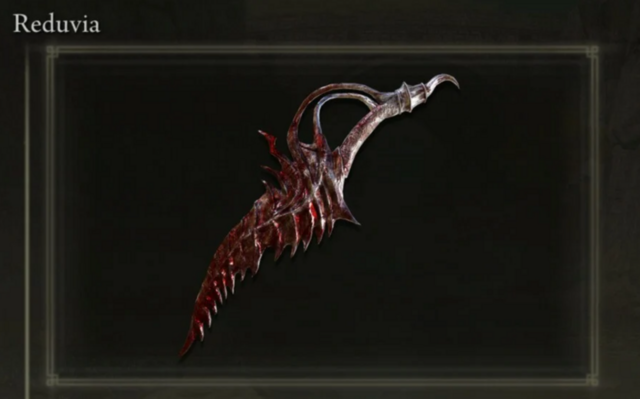 Another early-game weapon in Elden Ring, Reduvia is the clear-cut best dagger players can wield in the Lands Between. Dexterity builds will be hard-pressed to find a weapon that scales better with the Attribute. Reduvia also has the blood-loss passive effect along with a great Ash of War, Reduvia Blood Blood. This ash gives players the ability to slash at enemies from a farther distance and can be used in rapid succession. Players can unlock Reduvia by defeating Bloody Finger Nerijus near the Murkwater Catacombs in Limgrave. 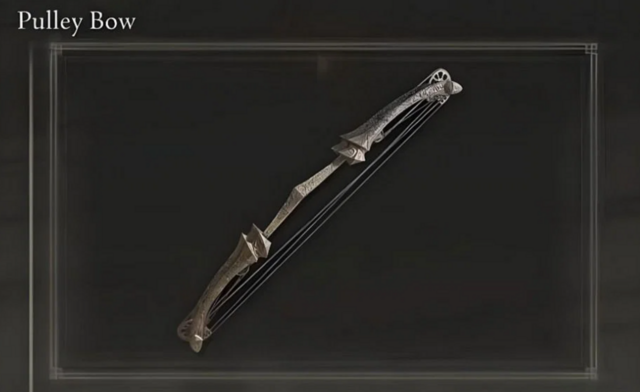 The Pulley Bow is perhaps the best well-rounded bow in Elden Ring. It deals decent physical damage for a standard bow and has the best range out of any bow in the game. Its level requirements are next to nothing, scaling with both Strength and Dexterity. Players can use its Ash of War, Mighty Shot, to inflict more damage onto enemies from a farther distance. While it’s not the most interesting choice in the bow/crossbow category, it’s arguably the top choice. Players can unlock the Pulley Bow by going to the top of a siege tower around the Mt. Gelmir campsite, north of Gelmir Hero’s Cave. 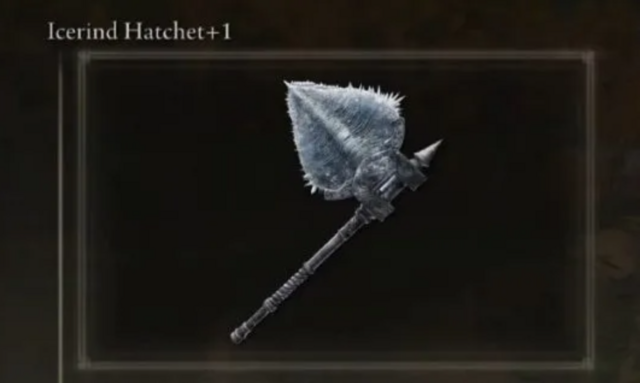 There aren’t many axes available in Elden Ring but players found early on that the Icerind Hatchet was among the best weapons to use. While the developers eventually nerfed the Icerind Axe, it’s still viable in mid-April 2022. What makes the Icerind Hatchet so powerful is its Ash of War, Hoarfrost Stomp. This was a speedrunner’s dream utility, as it allowed them and any other player to completely stop enemies from attacking. Once used, players will stomp the ground, staggering enemies with ice damage and eliminating chunks of HP. The hatchet also deals passive frost damage as well. Players can find the Icerind Axe in Temple Quarter of Liurnia of the Lakes inside of a ruined building’s chest. 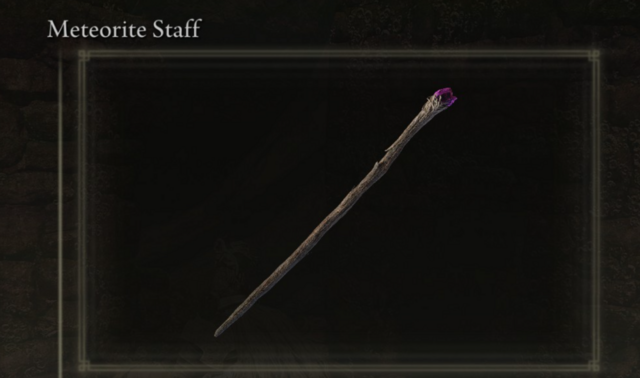 Easily the best choice for sorcerers, the Meteorite Staff has ridiculous scaling and overall stats. It has an “S” scale rating for Intelligence while boosting the power of gravity sorceries by 30%. This makes spells like Rock Sling and Meteorite of Astel even stronger than they already are. To make the case for the Meteorite Staff stronger, players can find it extremely early and equip any Ash of War they want on it. The only issue with the staff is that it can’t be upgraded, so players might have to eventually find another staff to replace it, like the one showcased below. Players can loot the Meteorite Staff at Street of Sage Ruins, near Sellia Crystal Tunnel, in Caelid. 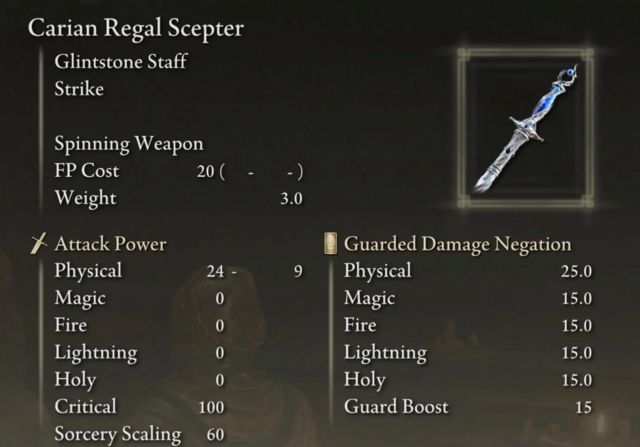 If players want to grow out of the Meteorite Staff, then they need to use the Carian Regal Scepter. This staff has the highest Intelligence requirement of any staff (60) but can deal massive damage and scales nicely with Intelligence and Sorcery. While Lusat’s Glintstone Staff does deal more damage, the Carian Regal Scepter comes with the Spinning Weapon Ash of War, which lets players spin the staff in front of them to deal with oncoming enemies. This deals magic damage based on the player’s Intelligence/Sorcery. Full Moon sorceries will also get boosted by using the scepter. Players can acquire the Carian Regal Scepter by defeating Rennala, Queen of the Full Moon, and trading in her Remembrance to Finger Reader Enia.