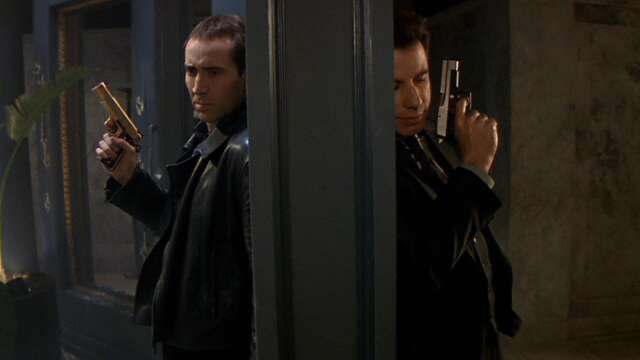 Face/Off is one of the greatest movies of all time, and anyone who disagrees is no friend of yours. Who doesn’t love John Travolta channeling the most unhinged Nicolas Cage performance? Cage isn’t exactly channeling Travolta in the face-swapping epic, but he does find a way to at least slightly tone down his over-the-top tendencies. But what matters is this all-time classic is now 25 years old. It was released on June 27, 1997, and we’ve been rewatching it over and over again ever since.

But as much as we truly adore this film, there are still some very questionable choices made. When you sit and think about Face/Off for a minute, it becomes very clear that there are a number of plot holes, big and small. They don’t matter in the grand scheme because it’s impossible not to enjoy this movie. That said, we have many questions after our most recent viewing of the movie.

So, to celebrate Face/Off’s 25th anniversary, join us as we venture down the rabbit hole and attempt to figure out what’s really going on with this movie. Will we ever get the answers we need? Absolutely not. But hey, there is a sequel on the way.

1. Why is Archer’s task force so secretive?

2. Why are they cutting his hair when his face is off?

I understand needing to trim Archer’s hair so he resembles Troy. However, why on earth are they doing it while his face is removed? It seems like a terrible idea.

3. How the hell does this work anyway?

Seriously, everything about the face-swapping surgery seems utterly ridiculous, especially the lack of recovery time. This is major surgery being performed on the entire body, and Archer looks good to go the next day.

4. How are faces connected to heads?

The lasers–because, of course, they use lasers–cut around the perimeter of the face, and then the skin is easily removed. I’m no doctor, but I’m pretty sure faces are connected to the skull more than just around the edges.

5. What is Archer’s face suspended in?

Archer’s removed face is put in a jug of hand sanitizer or water or something but they never tell us exactly what. This is a detail I’d to see looked into.

6. How, exactly, does a microchip in your throat work?

Maybe I’m wrong, but installing a microchip in somebody’s throat isn’t going to alter their voice. At best, it’ll get infected. And after pointing out how easy it would be for the microchip to fail, it barely figures into the story at the end.

7. Why does Archer’s daughter listen to “Papa’s Got A Brand New Bag”?

Why does a teenager trying so hard to be edgy and goth spend time in her room smoking cigarettes and listening to a James Brown song from 1965?

8. Why does nobody ask how Archer magically knew how to disarm a bomb?

When Archer manages to disarm the bomb (because he knew the code, of course) why did nobody question it? Even the bomb squad threw their hands up in confusion over the device.

9. Why would Supreme Court justices speak at the LA Convention Center?

Speaking of the bomb, it was planted at the LA Convention Center. Why were Supreme Court justices scheduled to speak there? Anyone who’s lived in LA knows that’s where E3 happens, along with a variety of professional conferences. But that’s about it.

10. Has professional comedian Margaret Cho ever delivered a worse joke?

The whole “stick removed from your ass” bit is a terrible joke, sure. But even worse than the joke is how badly it’s delivered. Margaret Cho is a professional comedian and deserved better.

11. It’s kind of wild how accepted sexual assault was in the workplace, right?

Even if we overlook his groping a teenager and making a flight attendant suck his tongue (we shouldn’t), when Troy is impersonating Archer, he clearly gropes his secretary in the middle of a very full office.

12. How does survive the swim from ocean prisons?

Archer is imprisoned on an oil rig in the ocean. How does he swim all the way to shore without being gunned down by the helicopter chasing him and to Newmark’s Seafood Cafe (not a real restaurant) barefoot to steal a car?

13. After getting his face back, does Archer have the ocean prison closed?

And speaking of ocean prison, what are the odds that Archer launched an investigation into the place for their horrible treatment of prisoners after he got his face back?

14. Why does nobody mention that running your hand down someone’s face is disgusting?

The Archer family’s habit of running their dirty, unwashed hands down each other’s faces is outright horrible. Seriously, there’s no way they’d still be doing this in 2022.

15. Why does Gina Gershon kiss her brother so tenderly?

It’s established in the movie that Sasha (Gina Gershon) and Dietrich (Nick Cassavetes) are siblings. So why, as he’s dying, do they share such a long kiss? It’s…weird.

16. Why does Lazaro get a beach funeral and not a policeman’s funeral?

Victor Lazaro was seemingly a highly respected law enforcement official with a high-level government position. So why is he given a funeral in a tiny chapel at the beach rather than the policeman’s funeral he should certainly be due?

17. Isn’t it weird that doves are flying around inside the chapel?

And why are there so many doves inside of this chapel? I get this is a John Woo movie, and doves are his thing. But having them flapping around during the ceremony seems like an awful setting for a funeral.

18. How many blank shots do you think they used on this production?

It occurred to me while watching that tens of thousands of blanks were likely fired during the filming of this movie. I would love to know how many were actually put to use throughout.

19. How do they re-add Travolta’s size to Cage’s frame?

I know how they got the weight off of Archer to turn him into Troy. How do they get it back on, though? Is Travolta’s weight just fillers now? If so, why not keep some of it off?

20. Why didn’t his wife pick him up from the hospital?

Even setting aside the fact that she’s a doctor, wouldn’t you expect her to want to be there when he gets out of surgery (and yet another miraculously fast recovery). Yet, she’s at home when he arrives and seems surprised by it. Did he not even tell her he was coming home?

21. Can you just take kids home after crazy shootouts?

And who makes the rules that let Archer, fresh out of the hospital, just bring this kid home? And why did he do it before asking his wife and child if it was okay?

22. Is it healthy to replace your dead son with the child of a maniacal domestic terrorist?

Furthermore, isn’t it weird to bring home the kid you confused with your dead son in a drugged-out stupor? It’s clear Archer is just trying to fill the hole in his life and, let’s be honest, that poor kid is going to be in therapy forever.

23. Seriously, how did Troy not get caught with a sniper rifle out in the open?

I know this is from the beginning of the movie, but I can’t get over it. Troy is in Griffith Park, one of the most populated parks in all of Los Angeles, just hanging out with a sniper rifle? How does nobody spot him, especially since he’s near the carousel?