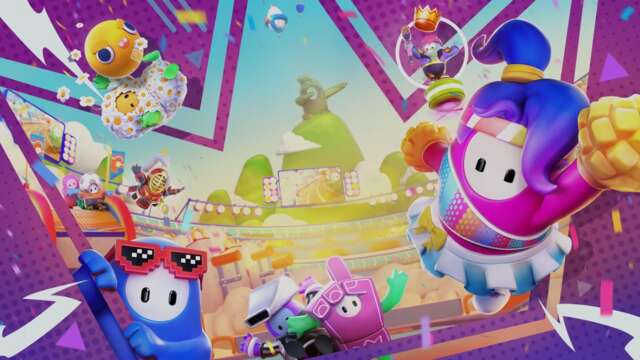 Fall Guys has officially gone free-to-play with the new Fall Guys: Season 1. The new season means the game no longer costs money to buy and is now available on new platforms, like Xbox and Nintendo Switch. The update also brings full cross-play and cross-progression to Fall Guys, along with the introduction of a paid battle pass, a first for the minigame based battle royale.

The new update also brings a handful of new shows, adding to the massive total Fall Guys has accumulated over its previous seasons. A number of these new shows are based on a new mechanic, the speed boost, which allows you to move much faster for a limited amount of time. Many of the new shows are also shorter than some of the previous shows, designed to knock players out much more quickly than previously, which is especially true for the two new final showdowns.

The new battle pass features a number of free cosmetic rewards, along with premium items. It includes paid currency in the premium tiers, along with a couple of crossover items. These items include Ezio from Assassin’s Creed, a variant of the Among Us character, and Mecha Godzilla as the final item of the battle pass. The pass can be advanced by completing daily, weekly, and season long quests, along with performing well during each match you play. Here are some tips to help you dominate in all seven of the new Fall Guys minigames and grab yourself the elusive victory crown. 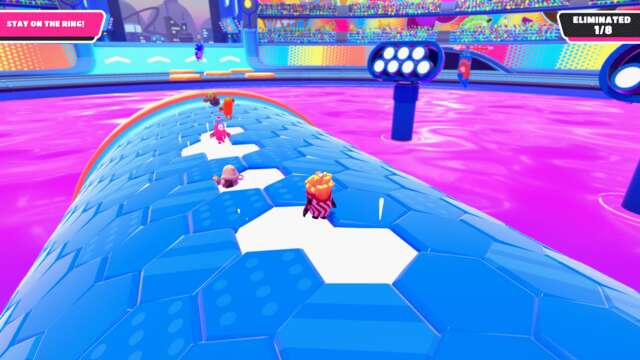 Hex-A-Ring is one of two new final showdowns in Fall Guys Season 1: Free For All. This game mode combines the disappearing tiles of Hex-A-Gone with Roll Out. Players need to stay on a rotating cylinder as the tiles disappear when walked over. The tile stacks go three deep, but disappear very quickly.

The key to winning Hex-A-Ring is staying as far away from other players as you can possibly get. This means that the tiles won’t be disappearing as quickly and you don’t run the risk of bumping into another player and losing all of your momentum. The cylinder starts spinning faster as time goes on, but at max speed it’s too slow to just run in a straight line up it, but too fast to spend much time moving horizontally. The most important thing here is paying attention to the number of tiles in front of you. An elevation change of even one tile means you can’t run over it and will have to jump, costing you some speed. Unlike some other final showdowns, Hex-A-Ring goes pretty quickly, since players are forced to run across the tiles at a faster pace, so this isn’t as much of an endurance battle as previous minigames. 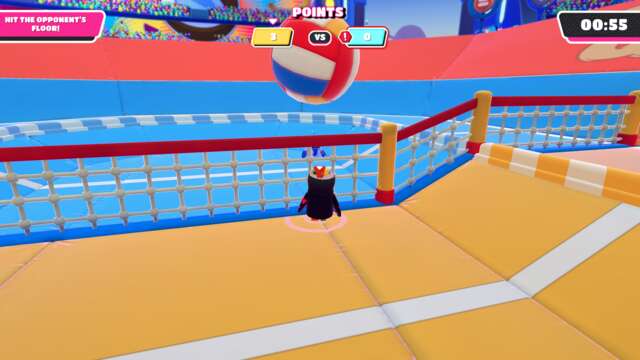 Volleyfall is a 1v1 volleyball match in Fall Guys. There is a short time limit and whichever player has the most points at the end of the round wins and gets to advance. While it really is just volleyball, the slight jank of Fall Guys adds an extra layer. There are a few important things to know for this game.

First, you need to jump when you hit the ball. Letting it just bounce off your head does not provide enough power to get the ball over the net. Second, you can hit the ball as many times on your side as you want, so if it doesn’t go over just hit it again. Third, there are invisible walls outlining the field of play. That means if you hit it towards the outside, it will bounce off the wall back into the field of play, which can be used to hit some nasty shots. 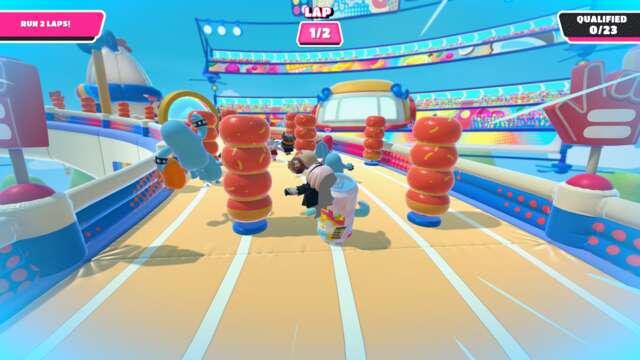 Speed Circuit is one of two new race courses, taking advantage of the new mechanic, the speed boost. Speed Circuit is a two lap race around a course, filled with obstacles and speed boosts. This is one of the least complicated minigames in the new batch, but there are a few tips to give you an advantage. One of them is to minimize the amount of jumping you do. You move your fastest when on the ground and when moving at a high speed, bumping into anything in the air, including other players, will cause you to fall and lose speed.

Speaking of speed, the speed boosts are time based, so even if you do fall, if you recover quickly you will be right back up to max speed. On the second lap the obstacles will begin to move, so keep that in mind. The last tip is that on the final turn of the map, there is an outside path that has a slightly closer speed boost. Don’t take it, as the walls at the end of that path will almost always trip you up. 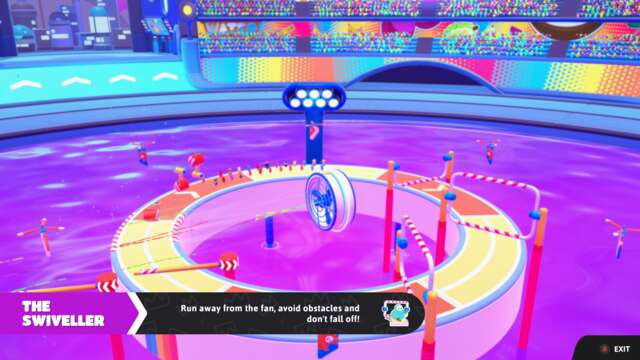 The Swiveller is a survival minigame and perhaps one of the shortest minigames in Fall Guys to date. The game is simple, there is a circular path with forward moving treadmills and a giant rotating fan in the middle. The goal here is to run fast enough to avoid the fan while also not getting knocked off by the obstacles. This one goes fast, with the majority of my rounds ending before even a single lap is completed.

The important thing here is you have to move forward, as fast as you can. It might seem like a good idea to go slow for the obstacles, but the fan will quickly catch up and blow you off. There are two obstacles on the path, vertically rotating and horizontal rotating. The vertical obstacles won’t always knock you off, and if you are lying on the ground from getting knocked over, you can go under them. The horizontal obstacles will always knock you off when they hit you, so those ones provide no room for error. 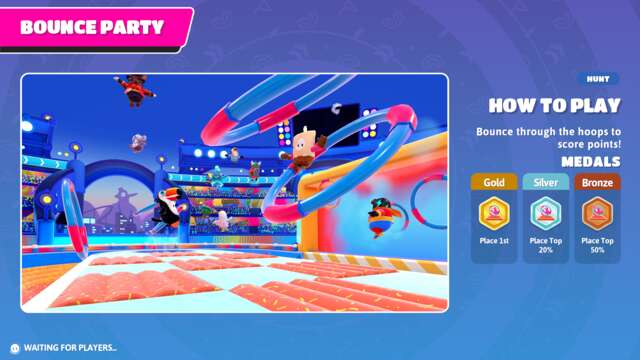 Bounce Party is a minigame where players need to use jump pads to go through rings and earn points as the rings float by. It takes 15 points to advance to the next round. While this minigame is fairly simple, there are awesome important things to know. First and foremost, the rings do not disappear when someone else jumps through them, like other ring minigames. That means you don’t need to concern yourself with beating other players through the rings.

As for the height necessary to reach some of the rings, it takes three clean bounces to reach the maximum height. If someone bumps into you or you bounce not on your feet, it might take an additional jump to get the maximum height. It’s also important to know that the golden rings are only worth 2 points and not 3 points like other minigames. That means it’s not always necessary to go out of your way to hit the gold rings, since it’s worth only one extra point. 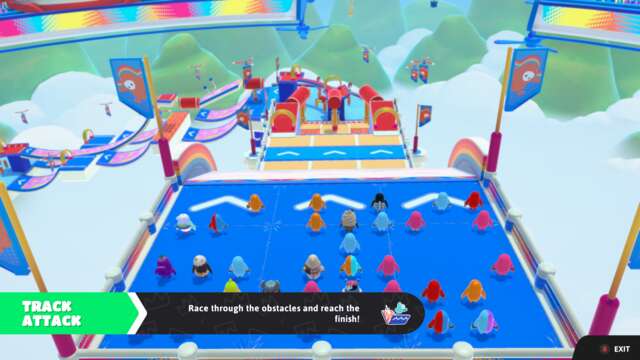 Track Attack is the other race mode, this one more of a downhill jam type map. This map is a downward slope, with speed boosts and slides scattered throughout. Once again, there isn’t much to learn here besides going as fast you can without hitting obstacles or falling off the map. The only tip you need to know is that at the start of the map there is an elevated middle path. This path has less obstacles and more speed boosts, but is very skinny. If you fall off, you won’t be able to get back up, but you should try and stay in the middle path as long as you can, as the extra speed will give you a big advantage. 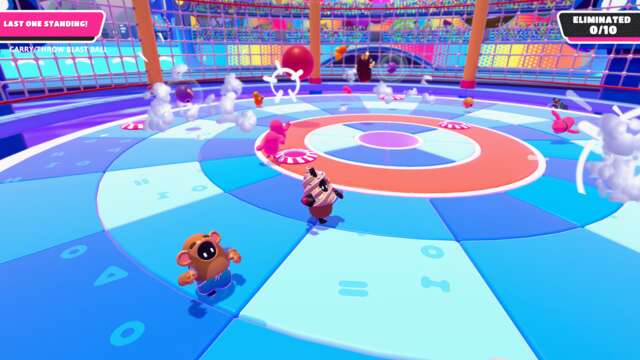 Blast Ball is the other new final showdown, resulting in a free-for-all battle. In this game mode, players pick up bombs that spawn around the map and throw them at other players, trying to knock them off the map. As the round goes on, pieces of the map will begin to fall, presenting more chances for players to fall off the map.

Paying attention to which parts of the map fall is important. The direct paths from the middle of the map to the bomb spawns won’t fall, at least not until very late in the round. As for the bombs, they explode after a certain amount of time and not on contact. The timer begins the moment you pick up the bomb, so you will need to time out the throw. The best method is to throw early, just to make sure the bomb has enough time to travel all the way to the enemy players. Some bombs are also reusable after they explode, so keep an eye out for those bombs as well. Another important tip is to avoid the edge of the map early and move out there as the number of players dwindles.