Here’s watch to watch for in episode 1, “Glorious Purpose.”

The third MCU TV show is now streaming on Disney+. Loki is off on his self-titled adventures after escaping his predetermined timeline back in Avengers: Endgame when the present day Avengers interfered with the past and–well, you don’t need us to tell you that this is exactly the kind of chaos you no doubt expected from the God of Mischief.

But things actually aren’t that simple in the show. It turns out the Tesseract, which fans assumed would be the crux of Loki’s galavanting through time and space, is actually nothing more than a glowing prop, totally useless in the face of the real powers that be. The TVA, or Time Variance Authority, has brought Loki in–not for manipulating anything with the Tesseract, but for escaping his timeline with it to begin with–and he’s going to have to stand trial to prove that he shouldn’t be “reset” (read: disintegrated) to preserve the flow of time.

Thankfully, he’s found himself something of an advocate–Agent Mobius (Owen Wilson), a TVA agent on a mission, believes that Loki can help the TVA track down a criminal causing variances in time all throughout the past and future. And it just so happens that the criminal actually is a variation of Loki–so who better to get inside his head than the man himself?

Of course, things can never be that simple, especially when you throw time travel into the mix. The series will no doubt become even more complicated as things progress, so it’s definitely best to start taking notes and keeping track of clues now before things spiral out of control.

Loki lands on Disney+ every Wednesday.

While it’s unlikely you’ve forgotten just how the 2012 time travel sequence went in Avengers: Endgame, here’s a convenient recap for you, including Loki stealing the Tesseract, which we assumed would play a large role in his story for the show. It turns out that was a bit of a misdirect though, as we see later in the episode–the TVA uses Infinity Stones as paper weights and the Tesseract is useless in their jurisdiction.

Loki’s use of the Tesseract sends him to Mongolia where he crash lands in the desert a la Tony Stark’s great escape in Iron Man–just less armor involved this time.

Who could forget Loki’s over-the-top villain monologues about how he’s been “burdened with glorious purpose?” He’s come a long way since then in the MCU, but this version of Loki never experienced any of his character building moments in subsequent films, so this is where he’s at.

Unsurprisingly, the TVA actually originates in Marvel comics, dating all the way back to 1986. They look a bit different in the show than they do on paper, however–in the books, the TVA is populated almost entirely by clones bred to complete their specific purpose. Though we learn that most TVA agents have never left the bureau, they’re certainly all unique looking.

Like the Iron Man homage earlier in the episode, Loki’s trip through the bowels of the TVA is very reminiscent of Thor’s ordeal as he became a gladiator on Sakaar. He doesn’t get a traumatic haircut, but he does get his clothes disintegrated and replaced with a prison jumpsuit. 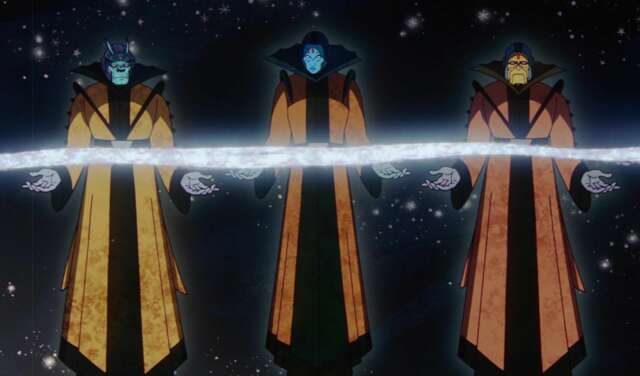 Like the TVA, the Time-Keepers are an entity borrowed from the comics, though the show’s version puts a bit of a twist on them. In the books, the Time-Keepers have a definitive origin–they were created by He Who Remains, the last known director of the TVA, in response to a failed experiment resulting in a breed of monster known as a Time-Twister, which threatened the existence of the multiverse.

The Time-Keepers seem a bit more shady in the show, and are so mysterious that no one save for Ravona Renslayer seems to have any contact with them at all.

Gugu Mbatha-Raw plays Ravona Renslayer who, in the show, seems to be a very high ranking TVA member–and the only person with any contact to the Time-Keepers. In the comics, Ravona is a D-list character who, perhaps significantly, has a connection to a time traveling villain named Kang the Conqueror. Kang will be introduced in the upcoming Ant-Man and the Wasp movie, played by Jonathan Majors–just something to keep in mind.

Owen Wilson plays Agent Mobius, based on a TVA agent from the comics whose full name is Mobius M. Mobius.

Mobius seems to have a real affinity for Josta Cola, the first energy drink ever marketed in the USA, back in 1995. It was discontinued in 1999, so it’s a good thing Mobius can time travel.

It’s a time travel show so we shouldn’t be surprised that we get a whole bunch of flashbacks–including ones back to the actual events of Avengers, where Loki was captured and taken prisoner rather than escaping with the Tesseract.

Surprise! It turns out Loki has been messing around with human history for a while. Here we learn that he was actually D.B. Cooper, the pseudonym of a notorious plane hijacker who took over a 747 between Portland and Seattle, demanded a $200,000 ransom, then parachuted out of the plane, never to be seen again back in 1971. Cooper was never identified, and this seems like as good an explanation as anything.

Of course, a tour through Loki’s life has to include Thor: The Dark World, even if it’s the least beloved of all the Thor movies. We see flashbacks to Friga’s death, one of the major moments that shaped Loki’s eventual turn to sort-of-kind-of good.

The TVA has more Infinity Stones than they know what to do with–which is no big deal, considering their powers are entirely useless within the building. It’s also worth pointing out that there are multiple copies of each stone just laying around, which really begs the question: Just how many variances and branched timelines involving the stones has the TVA had to handle?

Continuing on Loki’s speedrun of his own personal MCU history, we have to cover Thor Ragnarok, which not only saw some of the biggest bonding moments between him and Thor, Odin’s death, and ultimately the total destruction of Asgard.

Loki’s last stop in the memory reel is, of course, Avengers: Infinity War, where he was killed by Thanos as he tried to save Thor and the rest of his people–a pretty far cry from the petulant tyrant who wanted nothing more than to rule.