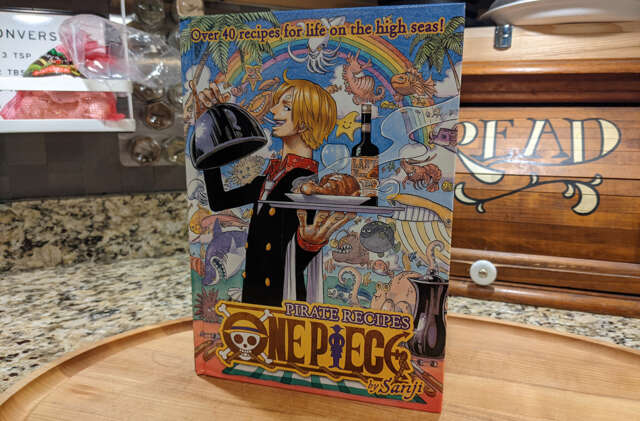 If you’re pumped for the 1000th episode of One Piece–which is a huge accomplishment–then you may want to try some of the foods you’ve seen in the anime or manga. Luckily, Sanji–yes, the cook of the Straw Hat Pirates–has put together a collection of fine foods to server your own pirate crew.

Releasing on November 23–three days after One Piece 1000–One Piece: Pirate Recipes from Viz Media and Shonen Jump will cost $27 and deliver over 40 recipes, most of which are mentioned in the manga series. The food comes from cooking supervisor Nami Iijima.

Of course, throughout my time here at GameSpot, I can’t resist taking a branded cookbook and trying to cook something. I’ve done it with Overwatch and WWE, so why not One Piece? At least with the One Piece cookbook, these dishes actually exists–in some shape or form–in the manga.

So, I picked out the most interesting recipe and tried to cook it myself at home: Meat on the bone. Here we go. 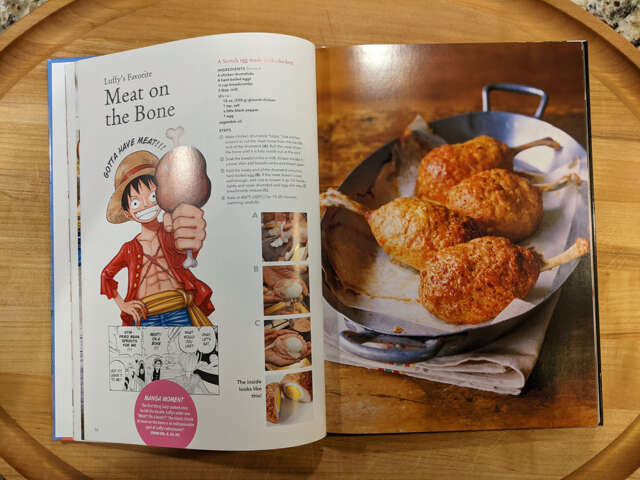 It’s a simple recipe with most of the recipe page taken up by very small pictures of how to butterfly a chicken drumstick. The pictures are really hard to see, for something that needs a bit of explanation for novice cooks. There’s also a giant picture of Luffy holding a meat on the bone. The font size for the recipe is incredibly small, and it’s hard to read–especially if you don’t have perfect vision. This recipe had very few ingredients, and I love a good Scotch egg, which this essentially is.

So the layout is a bit disappointing. But hey, that picture of the cooked meat on the bone on the right really is pretty. I had also planned on doing stir-fried bean sprouts, but the sprouts I purchased from my local grocery store were no good–like half rotten when I opened them. Anyway, let’s get into the cooking.

By the way, if for some reason, you’re squeamish about raw meat, just skip to the end, as there are plenty of pictures of my frustration with raw chicken.

Buy one of these silly egg cookers 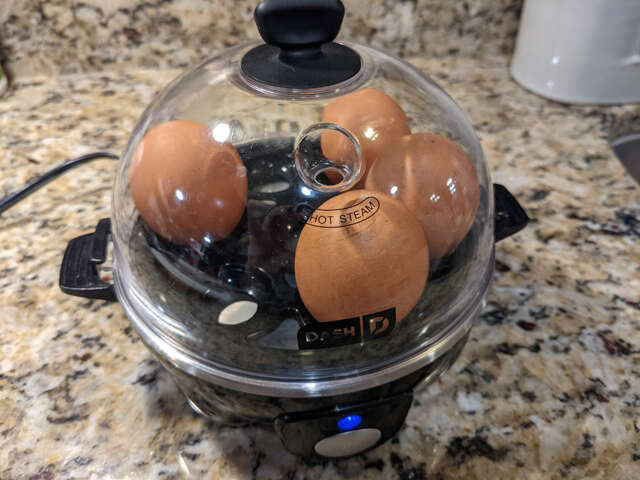 Originally, I had planned to make four of these meat on the bones. That didn’t happen.

The first step is cooking some hard-boiled eggs. I have one of these cheap egg cookers. It’s like $20, and it plays really annoying music when your eggs are finished cooking. It just steams your eggs to the level of your liking. 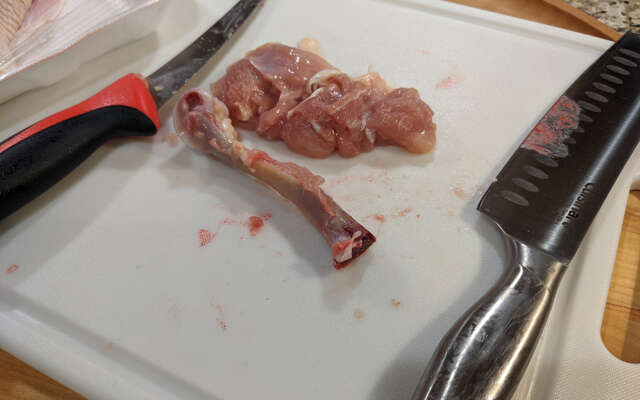 The first step has you making drumstick “tulips,” in which you cut some of the meat from the bone then roll it off–with the meat still attached to the bone at the end.

The first try did not go well. I couldn’t get the meat to work with me, so I got frustrated, cut the meat off, then chopped the end of the bone off. It was not a fun experience, so much so that I called it a night and decided to boil the bone to save it. 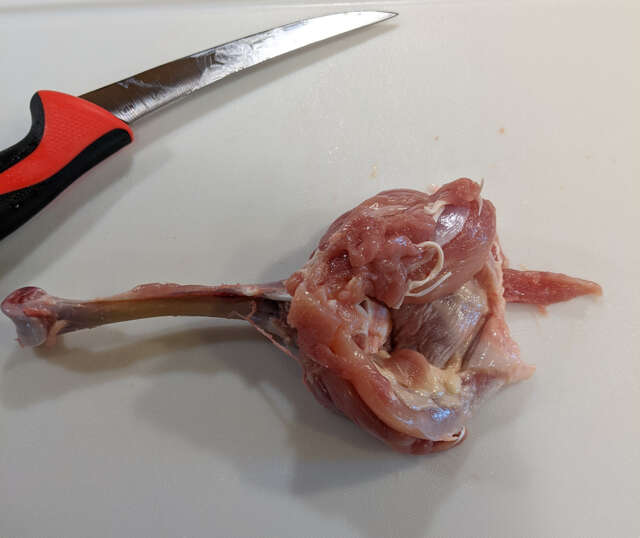 The next day, I decided to try giving the tulip method one more try. Somehow, I got it to work. 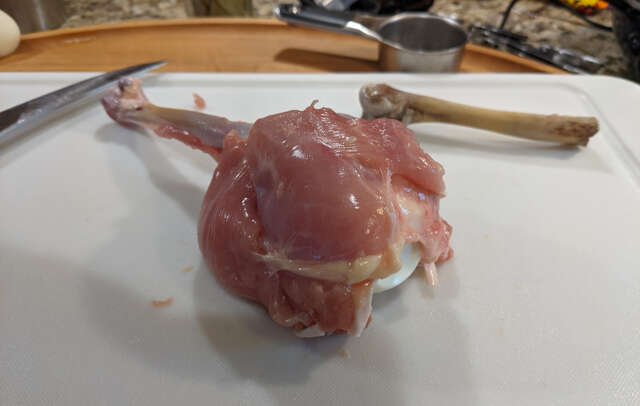 The next step was putting the egg inside that tuliped drumstick, and it was at this point that I realized the drumsticks I had purchased were way too big for this recipe. However, the recipe wasn’t clear on drumstick size, or not much else for that matter. 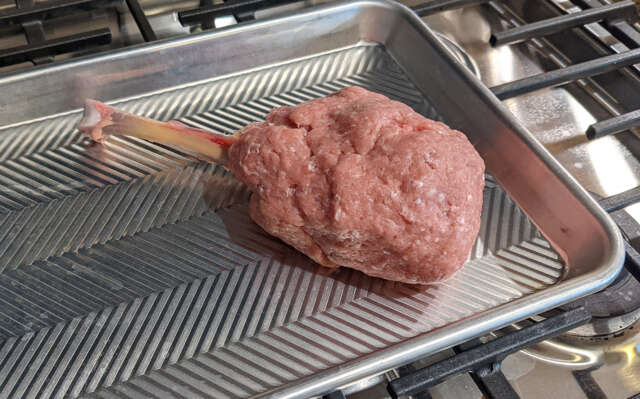 So after the egg is wrapped around the drumstick meat, you wrap it in some ground chicken–I used turkey here. No, it does not look appealing one bit. Strangely enough, it was a lot of fun to make though. However, the simplistic ingrediants led me to believe this wouldn’t be that tasty–as there’s only a little bit of salt and pepper in the meat mixture with breadcrumbs. 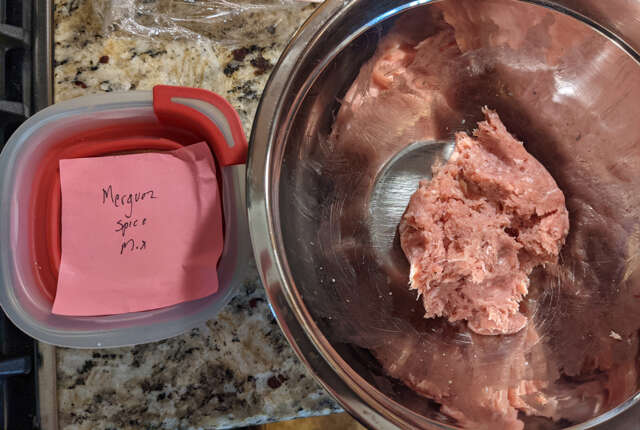 So kicking around my kitchen I have a spice mix for Moroccan sausage. I tossed a couple teaspoons into the mix for my second meat on the bone. Here’s how that one came together. 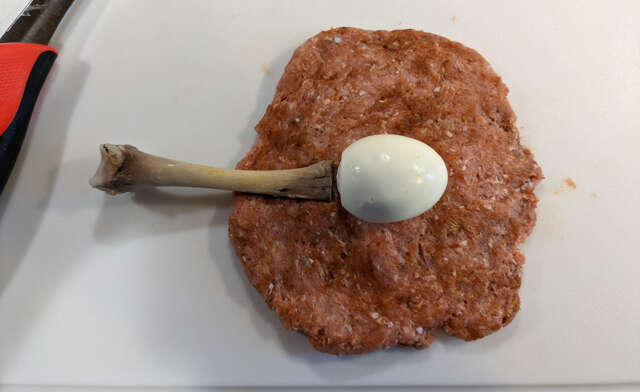 The actual drumstick meat was scratched for this one, and I used the bone I cooked the night before. I’m essentially doing a Scotch egg with a bone stuck in it here. 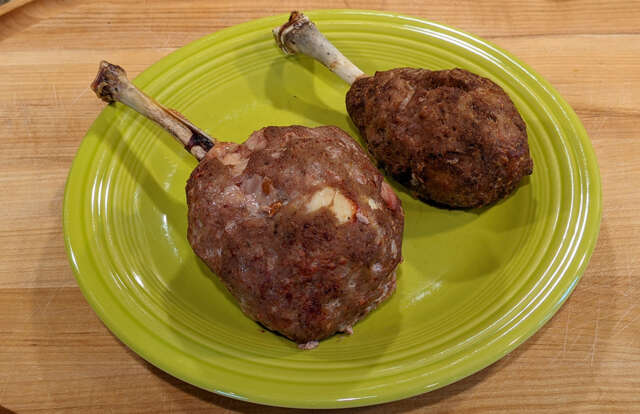 In the recipe, it says you’ll only need to cook this 15-20 minutes at 400 degrees F. My smaller version took about 35 minutes before it was fully cooked, and the larger one–which was closer to the original recipe–took 45 minutes.

The best part about this is that it just looks silly. It’s a bunch of meat on a bone that very much did not come from that bone originally. It looks like cartoon meat in real life, which is pretty awesome. 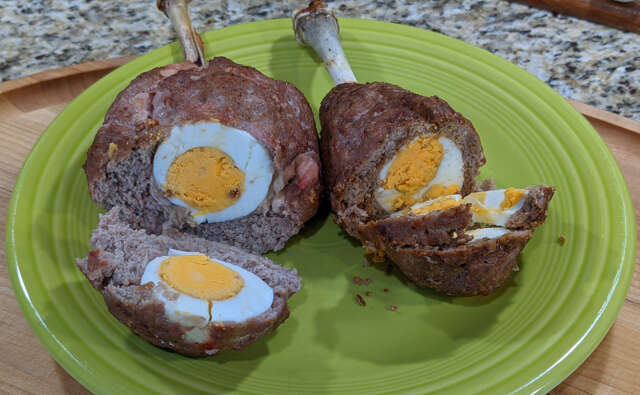 Aside from the original stumble of trying to tulip the first drumstick, this was a pretty easy recipe to make. More importantly, it was pretty fun, as long as you don’t mind getting your hands dirty–please wash your hands a lot while handling raw poultry.

The new take on the Scotch egg didn’t really lead to stunning results, as the original recipe was relatively bland, but if you’re throwing a One Piece party, this is the perfect thing to serve. As for my “upgraded” version, I used a bit too much seasoning, and it came off a little too salty, but it had some great spice. So maybe add some merguez spice–which is better used with lamb or beef.